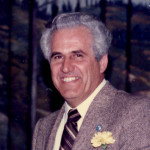 Vito was the voice of Motor City Motorsports and had been for over 20 years. He has been involved in auto racing for 55 years, primarily in the Detroit area. Vito was wounded in World War II and when he arrived back home, he immediately began attending races at Motor City Speedway.
LoPiccolo became a police officer and part of his duties was to pull over speeding drivers. He eventually pulled over Bill Stone and they became life time friends. He read an article in National Speed Sport News written by Bob Lewis of Grand Rapids. Bob had mentioned in his column that fan clubs were sprouting up all over the nation and wasn’t it a shame that Michigan did not have one.
Vito began corresponding with Lewis and shortly after, Vito and his wife Barbara, Bob and Norma Lewis, Willis and Marion Flokstra met on September 25, 1965 and formed the Michigan Automobile Racing Fan Club. Vito was the first president of the club and eagerly began to recruit racing fans for the club. In the first year, membership grew to a couple of hundred people. For the first 11 years, Vito was president of the club. He recruited people like Gordon Johncock, and that helped get other people interested.
After Johnny White was seriously injured and paralyzed from a vicious racing accident, LoPiccolo pushed to hold a fundraiser for White. The fundraiser was very successful and helped Johnny White financially. The Fan Club grew to 1,000 members and they had racers at their banquet like Bobby Unser, Dan Gurney, Poncho Carter and Johnny Parsons from the Indy car set. 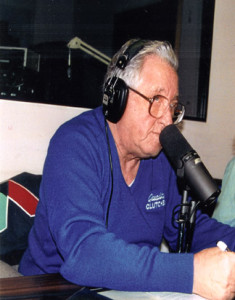 Around 1976, Vito stepped down as president of the Fan Club. He then took up the job of public relations director. In 1977, Vito and Bill Richardson started the first auto racing television program. It was called Motor City Motorsports, and it aired on WGPR TV 62.
In the late seventies, Vito was invited to the groundbreaking ceremonies at Michigan International Speedway. He worked public relations for the track for the next eleven years.
In the eighties, Vito began his radio show also called Motor City Motorsports. He says that his favorite Detroit area race drivers were Joy Fair, John Anderson, and Ray Nece.
Vito has received an award from the Michigan Racing Scene as media celebrity of the year in 2003.
Vito died on October 14, 2016 at the age of 90.  (1926 - 2016)