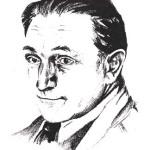 Born in Munich Germany on October 24, 1901, Charley Voelker later settled in Detroit where he was introduced to racing by working as a mechanic on sprint cars. 1930 found him as a mechanic on Abe Jenkins “Marmon Meteor” which set a 24-hour endurance record at the Salt Flats. Lockheed Aircraft employed Charley as a layout designer where he was involved in the design of the first low wing monoplane during the years 1930-33. Also in 1933 Volker served as a mechanic on the Graf Zeppelin when it made a record non-stop flight from Germany to Akron, Ohio and then to Chicago that was hosting the World’s Fair.
From 1934 on, Voelker was self-employed as the owner of Voelker Engine Company in Detroit. He designed, machined and built transmissions, gearboxes, and engine components such as crankshafts, pistons, connecting rods, etc. for such renowned racing people as Lou Moore, Rex Mays, Mauri Rose, Frank Lockart, Dutch Kline, Lew Welch of the Novis, and Jim Hurtubise. Voelker had teamed with Louis Meyer for his 1933 and ‘36 Indianapolis victories by building his engine components.
1936 found Charley Voelker designing and building one of the first quick change rear ends for race cars. When viewing an engine built by Voelker, noticed the name on the engine is “Voelker Engine”. It seems that a pattern maker spelled his name wrong on the engine and it stayed that way.
An example of Charley’s workmanship and devotion to his work is demonstrated by the following incident. Rex Mays had qualified his car for the Indianapolis 500 mile race and on a subsequent tear down he found a crack in the crankshaft. Charley was contacted and asked if he could machine a new crank and have it ready for the race the following week. Charley not only had it machined in three days, but he delivered the crank personally and helped install it in the race car.
One of the high points of Charley Voelker’s career came in 1939 when teaming up with boat owner Harold Wilson, as engine designer and mechanic. They won the Presidents Cup Race on the Potomac River with “Miss Canada III” and were presented the award personally by President Roosevelt in the White House.