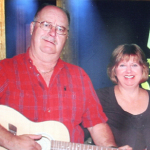 For 25 years Merritt Speedway in Merritt, Michigan was perceived as one of the best 3/8 mile dirt tracks in not only the state of Michigan, but the entire Midwest. That success was due to the hard work and dedication of one couple; Ed & Carmen VanDuinen.
Merritt Speedway was started on nothing more than a bar bet. Carmen’s father Gene Kregear was a regular competitor at the Cadillac Fairgrounds and a small track in Kalkaska Michigan. By the mid-60’s several drivers were displeased with the management of the Cadillac track and bet Gene to start his own track. Gene followed through with that bet and in 1968 Merritt Speedway located next to his home halfway between Lake City & Cadillac opened the gates for racing.
A young group of high school buddies; Ed VanDuinen, Carl Marsh, and Steve Mead started a race team in 1970 sharing driving duties behind the wheel of the red, white, & blue #9 machine. And although new in the sport Ed was enjoying a fair amount of success as a driver, especially as he was trying to impress the young, pretty, and hardworking promoter’s daughter.
In order to support himself and his racing career, Ed took a job working for Gene & Mary Ann Kregear throughout the week as a logging truck driver for the Kregear owned trucking company, and on March 14th, 1972 Ed & Carmen were married. 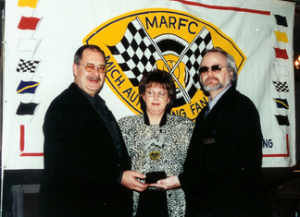 In 1973 the Kregear’s decided to sell their trucking company in order to prepare for their retirement and pending move to the state of Oklahoma. Ed & Carmen purchased the company and VanDuinen trucking was born.
Ed’s racing career continued, despite the fact that one-by-one his buddies had married and moved on. In 1977 Ed and his younger brother Chuck were all that was left of the original team. They decided to take on the role of observer when it came to racing.
When 1979 rolled around Gene & Mary Ann made their move to Oklahoma as planned and sold the speedway to Phil Fuller. Unfortunately, within one year the originally prosperous speedway had begun to struggle. Car counts had diminished and fans were scarce.
Living right next door to the speedway, it was torture for Ed & Carmen to see what was once a source of pride for the family, rapidly deteriorate and in 1981 Ed & Carmen pooled together whatever resources they could and bought the speedway back. It wasn’t easy with three young kids, but the couple managed and made Merritt Speedway truly a family racing facility. The kids were always working at the track, at first selling papers and popcorn and then as they got slightly older Lonnie took his place in the flagstand and Vickie & Stacey were always working hard keeping the long concession stand lines moving quickly.
Growing up in the racing environment Carmen realized the importance of making a show fan and family friendly. Merritt Speedway was the first track in the region to make auto racing a family sport. They built a playground behind the grandstands for young fans to get their energy out, the Merritt Speedway cows were always wandering the grandstands posing for pictures and passing out candy, and each and every week two kids were chosen to get a ride around the speedway as a Jr. Fan winner.
When the now famous Wood Tic 100 moved to a two-day event in 1991, kids games were the focus of early Saturday while the drivers prepped their cars for the evening of racing that lay ahead.
Ed’s early experience as a driver taught him how to be fair and keep drivers coming back week after week. Ed was always visible during the race riding in his pickup truck and after the races he was always there, the first one to get everyone together; staff, drivers, and fans alike to laugh about the nights events and talk about the good and even sometimes the bad. Ed was viewed as one of the most respected promoters in the state because of his loyalty to his staff and drivers, and his ability to rationally work out a situation.
Ed and Carmen have been honored with numerous awards for their outstanding leadership of Merritt Speedway including the MSPA Promoter of the Year - 1982, 1989, 1991, 1992, 2000, 2003; the Spartan Speedway Good Neighbor Award - 1981, 1982; the North American Racing Insurance Eastern Region Promoter of the Year - 1996; and the Michigan Motor Sports Hall of Fame Pat Beebe Award - 2007.
After 25-Years, in 2006 Ed & Carmen sold Merritt Speedway and handed over operations in order to have the freedom to spend time with their now grown children who had moved throughout the nation and their four grandchildren. Ed took the role of Executive Director of the Michigan Modified Association and now the couple splits their time between Michigan and North Carolina, but are often seen in the summer enjoying the sport that brought them together at various tracks throughout the state.
Ed died unexpectedly on July 18th of 2010. He was only 60 years old. He was born on May 4, 1950.