We have 524 guests and no members online 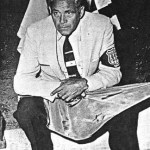 In the year 1904 on May 8th, Bill was born Willis Henry Vandewater, in Holland, Michigan.
He was a son of a Protestant missionary and like most kids, he loved auto racing. Billy Arnold was his idol and he would help with the racecar, and when Bill was too young to work on racecars he would sneak in, just any way to get in to see the races.
Vandy, as he often was called, started officiating in 1933 at the Chicago Armory and at old Roby Speedway for AAA.
He worked his first 100-miler in 1936 or 1937 at Milwaukee, Wisconson, and also started the "Springfield, 100" in Illinois that same year.
After about six years as an observer at Indianapolis Speedway, he became assistant starter in 1948, working down on the infield side of the track. In 1954 he was appointed official starter for the "Indianapolis 500" event. He was the official starter of the "500" until 1961, when he retired.
Vandewater would start three midget programs at the 16th Street Speedway on the night before the "500". Then be at the Speedway about 6:00 am. to get ready to serve as starter for the 500 mile race.

As of 1951, Van had started more than 2,700 race meets. Included were prestigious events such as the Mobilgas Economy Run, AAA Championship Trail , AAA stock car and midget events in the Midwest. (The AAA events later becoming USAC events). A partial list of tracks where Vandewater started at are: Chicago, IL, Milwaukee, WI, St. Louis, MO, Indianapolis, IN, Detroit, MI, Syracuse, NY, Langhorne, PA, Darlington, SC, Cedar Rapids, IA, plus Farmer City, Soldiers Field, Fairbury, Thawville, Peoria, Springfield, Starved Rock and Cahokia all in Illinois; Grand Rapids, Lansing Speedway, Sister Lakes in Michigan, South Bend, Lafayette, Kokomo, Salem in Indiana; Terre Haute (Stadium back in 1935 and 1936 and Fastrack in 1949, Louisville, KY, Cincinnati and Cleveland in OH.
He was the fellow who often times looked as though he was "oh so close" to those onrushing cars. Bill would do the ascot crossover start with a full field of midgets starting the feature event, while standing in the middle of the track. A real exciting beauty to watch.
A handsome man, Vandewater was also called "the fashion plate starter". Always dressed in a sports coat and slacks. Bill did a grand job, at one of the most important spots on a race track, and was truly an asset to the racing sport.
Bill Vandewater died on January 26, 1962 at the age 57.  (1904 - 1962)