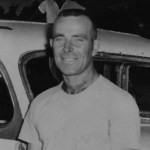 Emil Ujlaky was an active racec ar driver from the late 1940's into the mid 1960's. If a driver can even temporarily "own" a track, he "owned" both the 1/4 and 1/2 mile tracks at the old, famed Owosso Speedway. He was, however, a worthy, winning, and well known competitor throughout the State of Michigan, including Crystal, Grand Rapids (Speedrome), Jackson, Detroit, Auto City, Dixie, Holt (Spartan), and Lansing (Capitol City), just to name a few.
During his 15 plus year career, he was successful enough for several of those years to exclusively rely on racing to support his family. When able, he would compete upwards of nine times per week (afternoon and evening shows at different tracks). Although he enjoyed most of his success in stock cars, he was also very successful in modifieds and sprint cars. While he enjoyed racing on any surface or track, his personal preference was high-banked dirt tracks. 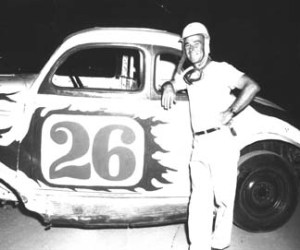 His fierce competitive nature coupled with his heart of stone and nerves of steel enabled him to be competitive, even in occasional ill handling race cars. These qualities let him run with the best drivers like Mickey Katlin, Iggy Katona, Joy Fair, Johnny Roberts, Jack Goodwin, the Fedewa family, and on. It has been said that Gordon Johncock even studied his driving style during Gordy's early years.
During most of his career, Emil Ujlkay was a "hat driver" and drove for only a handful of quality owners. In hindsight, a poor career decision, perhaps, was made in the early 50's when he declined a ride for the Indianapolis 500. At the very end of his career, he did drive and co owned a Richard Petty Plymouth. 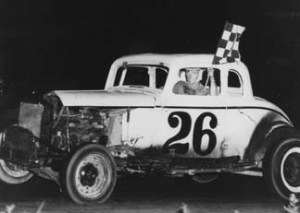 The legacy left by this driving pioneer is a son and a grandson who have been trying in vain to fill his driving shoes, which were permanently vacated on April 10, 1987. Emil Ujlaky thoroughly loved racing and literally gave himself to the sport. Although he raced primarily for his own interest, he always gave race fans their monies worth, and his exploits live on in the memories of many "old timers".