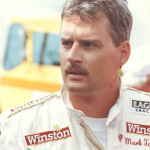 Mark Tate, born December 9, 1959 in Wayne, Michigan and has lived in Michigan for 45 years. Mark and his family currently live in Canton, Michigan.
Mark Tate is living, breathing proof that the apple falls close to the tree. His grandfather, Joe Sr., introduced the family into the world of boat racing and his dad, Joe, Jr., continued it. Mark Tate’s wife, Sandy is a former powerboat racer and holder of national high point national championships and world records in limited inboard racing. Their sons Andrew and Brent have carried the tradition into the fourth generation driving hulls designed by their dad.
Mark Tate began his race career in the outboard J stock hydro class at the age of 12 (1972). His first race was at Ford Lake, Ypsilanti, Michigan. Mark graduated into the inboard hydro class at the age of 17. Mark stopped along the way and graduated from both the Bill Scott Car Racing School in Virginia and The Bob Bondurant High Performance Racing School in Arizona. 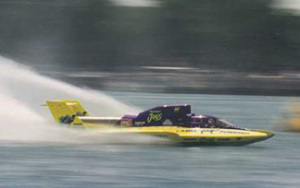 Tate qualified as full-time unlimited hydroplane driver in 1990 and was named the Unlimited Racing Commission’s “Rookie of the Year” after that initial season. The URC renamed the Unlimited Hydroplane Racing Association crowned Mark as Driver’s National Champion in 1991, 1994-1995 and 1997. Only five drivers have won four National High Point Championships in the unlimited ranks. Mark Tate is one of them. (The other four are Bill Muncey, Chip Hanauer, Dean Chenoweth, and Dave Villwock.)
In 1994-1995 and 1997 he earned another accolade, induction into the American Power Boat Association’s Hall of Champions. That award goes to the driver who has the highest standing in hydroplane racing in a given racing category over an entire season. In all, Mark Tate earned the distinction six times, twice while driving limited inboards. 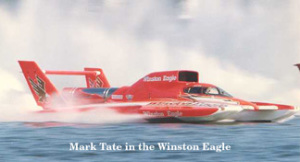 The Detroit race, ranked by unlimited hydro drivers as the “Indy 500” of powerboat racing, gave Mark his most thrilling victory in 1991. Tate officially set the fastest unlimited hydroplane lap in history, going over 170 mph on the Detroit River in 1993 and still holds the record today. Tate has two APBA (American Power Boat Association) Gold Cup victories on the Detroit River. The Gold Cup is officially known as the APBA Challenge Cup, designed by Tiffany’s at the turn of the Century. It is the oldest continuous motorsport racing trophy in competition today. Detroit is also the place where Mark last raced in 2004. Will he retire?
Mark has set over 27 course records in his 33-year racing career. He has set six unlimited world records and numerous course records. Tate has 12 unlimited hydroplane career victories from 1991-1997. During his unlimited racing career, Mark has finished 261 heats, winning 117.
Husband and father, when Tate is not racing, he keeps busy with the family business, Sun Coatings.