We have 508 guests and no members online 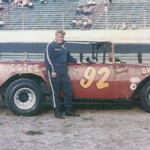 Raymond Batts, better known in the racing community as Buddy Stewart, started racing in 1960. His first full year of competition being 1961 at the Grand Rapids Speedrome.
The first track he ever raced at was Hastings Raceway in a Sportsman Modified owned by Marv Blain. Buddy won races at over a dozen tracks across the Midwest. In 1963 he won more than 20 heats and features in the Sportsmen Modified division. He raced at 43 different asphalt tracks and 8 dirt tracks in his career.
Some of his most memorable wins involved some very peculiar circumstances. There was one race at the Speedrome called the Candlelight Race. Kerosene soaked torches were hung on the walls and set on fire. With only the smoking kerosene torches for light the modifieds would roar around the track. Buddy was good in the dark and he won this particular event many times. His first television interview came after a win early in his career at the Minnesota State Fair, where the venerable Chris Economaki interviewed Buddy. Another win in the open wheel car involved a huge wreck at Berlin, while running a tight third the lead cars all crashed coming out of turn four on the last lap. Buddy’s front end was ripped off the car entirely, with only the engine and rear wheels hanging on the car. Buddy crossed the line first - then, not to let a little thing like a wreck dampen his spirits, he jumps out of the twisted mess and took the checkered flag in hand and made his victory lap, jogging around one of the tractor tires protecting the pits as the crowd erupted in approval. 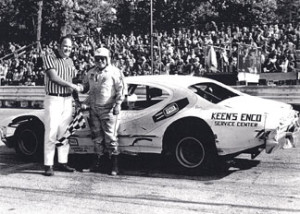 Other exciting races include the “Little 500” in Anderson, Indiana. It was here, in the Dri-Powr Sprinter that Buddy set a 10-lap speed record that stood unbroken for 11 years. The Little 500 was a particular thrill purely for the racy-ness of it; guys would run three wide into the corners and then dodge the push trucks on the front straight as they shoved off the stragglers.
Buddy is no fan of fire, but managed to escape serious injury at the Minnesota State Fair by the “seat” of his pants. While racing, his open cockpit sprinter caught on fire, so he jumped up on the seat to get out of the fire and steered the car down pit row where crew members grabbed the nerf bar and slowed the car to a stop and the fire was finally extinguished. Although it was not a win, Buddy still counts one as his most thrilling rides finishing second to Butch Miller at the high banks of Winchester Speedway.
For more than 36 years Buddy has been up to his elbows in racing. Driving for 33 years and owning various cars (from sportsman to ARTGO) that his son has piloted, for the past few years. Buddy has said many times that there is nothing he would have rather spent his life doing than racing. He doesn’t understand the allure of illicit drugs because he says the adrenaline rush that comes from racing is 100 times better than anything you could buy on the street. 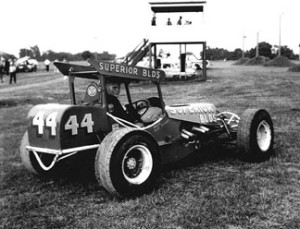 Since the days of Zorro and the Lone Ranger our kids have looked for heroes and Buddy is thrilled to see the incredible popularity of racing being is enjoying again. He says we can give kids new, respectable heroes. We have lost our basketball and baseball heroes to Hollywood. Racers are becoming kid’s heroes now. Not just the Winston Cup guys, but the locals too. He reminds us that we are setting examples for these pint-sized fans and it is our responsibility to do a good job for them. Buddy was on the forefront of catering to kids, as there is more than one 30 year old who remembers getting an autograph and the chance to sit in Buddy Stewart’s car after the race, those guys never forgot and now their kids get to sit in a Stewart Family race car after the race.
Buddy’s original plan was to bring his talent to Indy, but as Indy cars got smaller, and Buddy got bigger, his plans changed. Just the same, there isn’t a minute of it he would change (other than getting that really big break) and the whole thing continues to be a blast.
Raymond Batts (aka: Buddy Stewart) was born on February 2, 1941 and died of natural causes on June 24, 2006 at the age of 65.   (1941 - 2006)