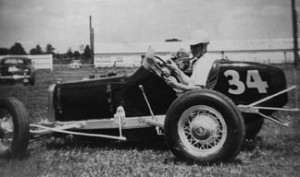 Elmer C. Stevens was born on January 17, 1916 in Bay City, Michigan and was raised in Jackson. Elmer started racing in 1932 at the age of 16. He had to get a notarized paper of permission from his father.
Elmer started racing in what was known as Hobo Race Cars, which were a chassis, engine and a bucket seat. He tells of his first race in a Sprint Car was on the mile track at Fort Miami in Toledo, Ohio in 1937. About the same time he started driving the Roaring Roadsters (Hot Rods) up until World War II stopped racing. Elmer went into the Air Force from 1942 until 1945, and then resumed his racing career in 1946 driving Sprint Cars, Midgets, and Stock Cars, plus the Roaring Roadsters.
He finally gave up all driving in anything except Sprint Cars. Through all the years he raced strictly on dirt tracks. Around 1946 he joined the Central States Racing Association (CSRA) in which he drove in both the Silver Crown and Gold Crown divisions. In 1949 some drivers and car owners decided to form an organization so they wouldn’t have to compete with the more expensive Offies. They formed what was called RACE short for Racing Automobile Contest Enterprise. They started racing on the same dirt tracks that they had been racing on in Michigan, Indiana, Ohio, plus a couple of tracks in Canada (Windsor and Chatham). 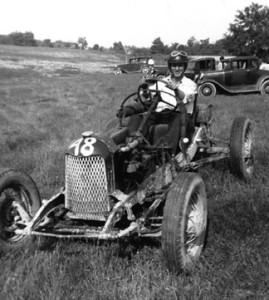 Elmer Stevens ended up the first RACE Season Champion in 1950. In 1951 National Speed Sport News covered RACE held a banquet in Lansing and the event.
Elmer continued to race until 1956, when he retired from racing. It would take a book to record all of his accomplishments in racing.
Elmer Stevens died on April 20, 2012 at the age of 96.  (1916 - 2012)