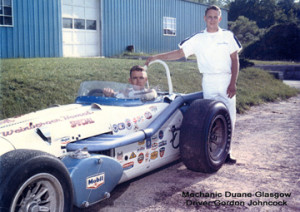 Duane Glasgow, from Hastings, is one of the best auto racing mechanics the state of Michigan ever produced. From his early years as the mechanic on the Mace Thomas owned, and Gordon Johncock driven super modified to becoming a renowned Indy car mechanic.

He turned his mechanical wizardry to motor sports in 1957 at Galesburg Speedway and went on to be the winning mechanic in over 150 races. His sharp skills kept Johncock's number 85 super modified at the front of the pack in the early 1960's. Duane was the winning mechanic on Johncock's super modified on such famous tracks as Oswego, New York; Winchester, Indiana; Eldora, Ohio; and Williams Grove, Pennsylvania.