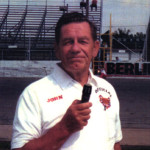 John Shipman was the "Voice of Berlin Raceway" for over 30 years. Watching his first stock car race at the now defunct Grand Rapids Speedrome in 1950, John began attending Berlin Raceway when it opened the following year.
When Hank Heald, Berlin's track announcer, was ready to retire from announcing he approached John Shipman and inquired if John was interested in Filling his soon to be vacated announcing position. hank had seen John in attendance at every race and figured John knew the drivers and cars better than anyone else. 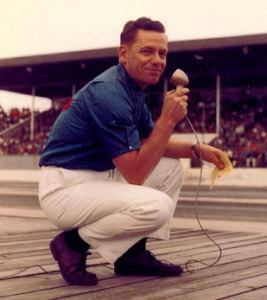 Since that time in 1958, Shipman has been Berlin Raceway's announcer. It is estimated that John has announced over 500 racing programs. He has had the pleasure of announcing programs which featured Hall Fame members such as Glenn Rocky, Johnny Johnson, Norm Brown, Dick Carter, Gordie, Eddie & Bruce VanderLaan, Ed Howe, Bob & Rich Senneker and Johnny Benson. He has been a standout announcer at one of Michigan's premier race tracks.
Asked why he continued in such a grueling position for over 30 years, John replied, "Every spring Chet Mysliwiec would call and say, 'Are you ready to go again?' and I would always reply, 'If you want me to." Asked if he would someday retire, John stated, "Sometime in this lifetime I want to find out what other people do on Saturday nights in the summer!"
John died at the age of 95 on September 25, 2014.  (1919 - 2014)