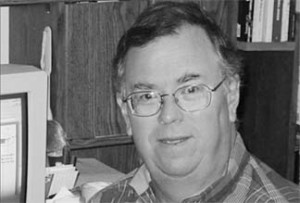 Larry, who resides in Shelby Township, MI, has been major force in Chrysler’s drag racing involvements since the late 60’s. He holds two Master’s Degrees, one in Mechanical Engineering, U. of MI, and a second in Automotive Engineering from the Chrysler Institute. Larry’s career at Chrysler began in 1968, and his first assignment out of the Chrysler Institute was in the suspension design area. His racing-involved career at Chrysler began in Feb. 1970, working on the Stock class programs, and his career moved up from there. From 1968 to 1979, he organized and spoke at Chrysler Drag Racing seminars, which took place in 6-9 major cities per year. Also during this time frame, Larry was the assigned factory engineer assisting on Bob Glidden’s 1979 Pro Stock championship when Bob competed with his Plymouth Arrow. Larry also drove the Chrysler Drag Racing Development Test cars from 1977 to 1979. Larry is a prolific published author, with over 35 Technical racing and engine design/building books to his credit. His books are generally considered the “last word” in regards to Chrysler performance engines. Larry spent 33 years at Chrysler Corporation, 1968-2001, working in the race group and at Direct Connection/ Mopar Performance Parts.
Ramchargers and Chrysler racing legend Tom Hoover has referred to Larry Shepard as “our minister of information”. A respected industry expert on drag racing chassis and engines, Larry has worked with a virtual who’s who in motorsports, to include Dick Landy, Joey Arrington, Tom Hoover, Keith Black, Dave Koffel, Ted Spehar, Maurice Petty, Dick Maxwell, Gary Stanton, Jack McCormack, Bill Hancock, Bob Glidden, David Nickens, Ray Barton, and many more.