We have 445 guests and no members online 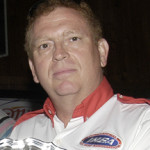 John Haas was born in Allegan on October 27, 1954 and lived there all of his life. He has raced motorcycles, cars, snowmobiles, and boats since the age of 13. He married his high school sweetheart Deanna in 1976.
In 1978 John bought his first drag boat. It was a 18 foot 1967 Hondo flat bottom. He put a 454 big block Chevy motor in it. Two years later he bought his second flat bottom boat from Art Bennett, it to was a 18 footer, but it was much faster with speeds upwards of 110 mph.
John got a chance to run a Hydro boat when Tom Earhart and he were at Hardy Dam. That boat went 135 mph. He also got to see his first ADBA (American Drag Boat Association) event and after watching the Top Fuel Hydros reach 220 mph, John told one of his friends, “I’m going to drive one someday.”
John bought his first Hydro in 1984 from Art Bennett. It was a 1979 Hondo. It was capable of 150 mph. He modified the boat in 1988 and called it the “Executioner” and joined the MBBA (Midwest Bracket Boat Association) an put a 540 blown Chevy in it, running on Alcohol. In June of 1989 he entered his first sanctioned drag boat race in Oregon, Illinois and he ended up winning his class with a top speed of 174.95 mph. At the end of the season John was ready for a faster, and lighter boat. The one he had weighed 800 pounds. He drove to California to pick up a 1988 Kurtis Kraft 501 Hydro which tipped the scales at about 400 pounds.
The following year John was instrumental in getting a MBBA sanctioned race on the Grand River in Grand Rapids, Michigan. John won his class in his new boat. He ended up as the MBBA Top Alcohol Hydro Champion. The MBBA disbanded at the end of the season, and a new organization was formed called the MDBA (Michigan Drag Boat Association) in 1992.

They returned to the Grand River for the “Grand Thunder”. John, being the Vice-President of the new group decided not to run his boat and concentrate on officiating the event. A few weeks later he ran his first ADBA (American Drag Boat Association) event finishing second in his class. He sold that boat at the end of the year and went to California again to buy a newer Kurtis Kraft. This one had a capsuled seat, meaning he was completely enclosed as a safety precaution. The following year he did run the Grand River event and won his class.
He ran most of the 1993 ADBA races and with consistent finishes ended up runner-up in the Top Alcohol Hydro Championship that year. He continued to run with the ADBA for the next two years. In 1996 the NDBA (National Drag Boat Association) was formed. A combined effort with the new NBDA, the ADBA and some regional groups. He ended up being runner-up in points again in 1996. He pretty much sat out the 1997 season. The next year he was back and was leading the points with two races left, but a terrible spill at the Grand River event sent him to the hospital and he ended up missing the last race and was runner-up once again in the ADBA. He had flipped the boat about 180 mph and was knocked out. His injuries included a broken neck, and compression fractures between C-5 and C-6.
The following year (1999) he bought a newer 1994 Kurtis Kraft in California. But his real break was when Roger Way out of North Carolina asked John if he’d like to run his Top Fuel drag boat, but John had to be licenced first. Their first try was disastrous as they never got a chance to make a full run. The next weekend he got his second chance at an event in North Carolina. This time he passed with flying colors and then to top off an unbelievable weekend he ended defeating a nine boat field to win in his first IHBA Top Fuel Hydro race as he blazed to a 233.02 mph run. He also won two more races in his Alcohol boat that year. He then sold his “Executioner” and continued drive a Top Fuel boat for Roger Way. The engine in Roger’s boat produced 7,000 horsepower. He ended up winning twice that season and won the NDBA High Point Championship. The following year was tough on John as first his sister Linda suddenly died and then a few months later his father died. John and Deanna drove home from a race in Georgia, but after the funeral, John flew back to North Carolina for the next race and ended up winning the event and dedicating the win to his father Eugene. John continued to run a Top Fuel Hydro for Roger Way through the 2003 season.
In 2004 John got the nod from Lou Osman to drive his “Speed Sport Special” Hydro, but things started out slow.
In 2005 his career took a turn for the best as he won three straight and he had his first four second pass at a IHBA Nationals. That year he turned a 4.762 second ET. He also had a set a top speed of 252.24 mph. The same year he was named the National Series “Driver of the Year” as well as winning the Top Fuel Hydro World Championship.
Then in 2006 he won the $50,000 Nitro Nationals Bounty winner. He also topped the charts with a 4.705 ET and he also set a top speed of 255.78 mph. He was leading the points when a bad crash in Augusta, GA destroyed his boat. John was OK, but they were out for the rest of the year.
The following year a new “Speed Sport Special” was ready saw much the same as he repeated as Top Fuel Nitro World Champion as well as being the overall point champion and the “Pro Driver of the Year”.
In 2008 he won finally won the prestigious World Finals at Firebird Raceway as well as his third Top Fuel Nitro World Championship.
Last year saw John surpass all records with the fastest times in a 1/4 mile (4.535 seconds) as well as in the 1/8 mile (2.626 seconds at 227 mph). The “Speed Sport Special” team went on to claim yet another Top Fuel Hydro World Championship.
John was tragically killed in a high speed crash in Oklahoma on August 7th, 2010.  (1954 - 2010)
John left behind his wife Deanna and two children. Joey and John, Jr.  John, Jr. is married to Jenny, and they gave John, Sr. and Deanna their first grandchild. Her name is Kaylee.