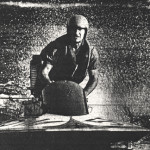 Sam Sayer started racing boats in 1953 in “B” stock hydroplane and was a consistent winner. He retired from racing in 1984.
Over the 30 years he raced boats, he designed and built 25 hydroplanes and one runabout. His fourth boat turned out to be his first championship boat. He was the American Power Boat Association (APBA) Region 6 champion for five consecutive years and the national champion in his class for three of those five.
In 1959, Sayer took third place at the Stock Outboard National Championships in Seattle, WA. 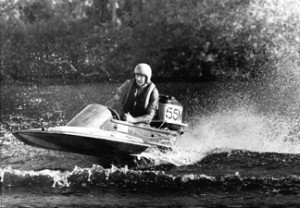 He won numerous Regional and Divisional championships, and has over 200 trophies, plus plaques and certificates of merit.
He did all the repairs on rebuilding of his racing engines, and was never disqualified with an illegal engine.
Sam Sayer became a charter member of the APBA Region 6 Stockboard Racing “Hall of Fame” in 1959.
Sam Sayer died at the age of 90 on March 5, 2009.