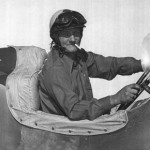 A veteran of the motorcycle and automobile racing tracks, Rondie was born in Lansing, Michigan on October 23, 1900. He began motorcycle racing at age 16 and racing cars on the Lansing track at 20. Rondie raced every season (except the World War II years) until 1961 when he quit because he had a mild stroke.
Even during the war, however, he continued his interest in racing cars. He made foot-long miniature automobiles, patterned from his favorite ‘96” to pass away the time during the war. Equipped with gas engines, the baby-sized cars could attain surprisingly high speeds.
Rondie set the world one-mile flat track felxi sidecar record on an Indian about 1922. He raced as part of the Indian factory team in the Midwest and eastern states for several years. 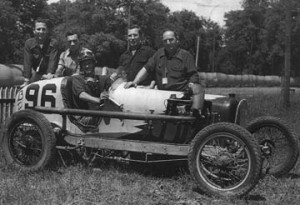 He decided to switch from motorcycles to automobiles after attending a race at Jackson. Rondie began auto racing in 1920 at the old fairgrounds track with a home made Fronty Ford, a combination of the Model T and the Frontenac head. He won the 25-mile race in this first competition, which encouraged him to start racing all over the country. Over the years he competed at tracks (mostly at fairgrounds) in Detroit, Des Moines, Fort Wayne, Tampa, and other cities in the United States and Canada. He started in the 1928 Indianapolis race, but dropped out when he broke a crankshaft in the qualifying heat.
Rondie competed in both motorcycles and automobiles until the mid 1920’s. In 1924, Johnny Seymour of Escanaba, Michigan and Ralph Hepburn of Los Angeles came to the Midwest as part of the Indian Motorcycle team and Rondie had to compete against them.
Rondie’s greatest thrill was when he beat Ralph DePalma in a 25-mile race at Jackson in 1925. DePalma ran third in the event and then quit because of car trouble. Rondie raced for over four decades. His last race was at Traverse City in 1961.
When Rondie “retired,” he didn’t exactly retire from racing altogether. He gave pointers to Lansing area stock car and kart racers. He was the starter at East Lansing Kart Track until shortly before his death in 1967.