We have 109 guests and no members online 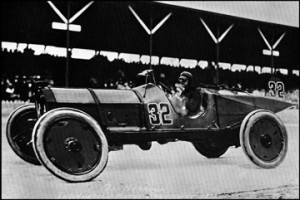 Ray Harroun was born on January 12, 1879 in Spartansburg, PA. The automobile as an invention was just coming into it’s own as Ray became of age, so as a young man he was certainly fascinated. He built his first car in 1905, and then would relish in racing anyone, anywhere, at anytime!
Ray was the very first winner of the Indy 500 in 1911 at an average speed of 74.59 MPH, with a race time of 6 hours, 42 minutes, 8 seconds in the legendary Marmon Wasp. The race was sanctioned by the AAA. Even though it was common to have riding mechanics in a race car both preceding and succeeding this period, Ray ran the 1911 race without one. To compensate for that lack of extra eyes in the car, Ray installed a rear-view mirror. It is of common automotive history belief that this was the very first time that a rear view mirror was installed in a car of ANY type, racing or otherwise.
Prior to his historic 1911 Indy 500 win, Ray competed in over 60 races, never finishing out of the top three. Ray was the 1910 AAA National Champion, and won eight major races at the Indy track before the 1911 Indy 500. Ray Harroun won a race on April 13th, 1910 at the one-mile track at Playa del Rey, CA, the nation’s first wooden board track. Ray won that race with a 78 MPH average. He also won a 200 mile race at the Atlanta Motordrome on May 7, 1910. These races also included the 100-lap 1910 Wheeler-Schebler Trophy race, and the 50-lap 1910 Grand Remy Brassard race, both won at the Indianapolis Motor Speedway on the same day, May 29th, 1910. The Indy 500 evolved the next year from these races. Ray also won races at Churchill Downs, Ft. Wayne, Los Angeles, Memphis, and New Orleans in 1910.
Ray retired as a driver after his 1911 Indy 500 win, but remained in racing as a car owner with drivers like the famed Eddie Rickenbacker, racing Maxwell cars. During his own driving years, Ray drove mostly Marmons, but also competed with Buicks and cars of his own design, including the Harroun Sneezer and the Harroun Custom. 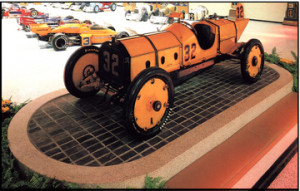 After retiring from racing, Ray lived in Saginaw, Oscoda, and Wayne, Michigan. He founded the Harroun Motor Car Company, which built 500 roadsters in the first year of operation. Ray switched over to wartime production for WWI, making military equipment and munitions.
In later years, Ray assisted the WWII effort by designing and building the vehicle that transported and loaded the bombers. He was also assigned the task of designing and building an experimental engine for special military vehicles. It was an 8 cylinder-opposed with one spark plug for 2 cylinders. Ray’s son Dick Harroun installed one of those engines into a midget race car owned and driven by racer and friend, Eddie Ostwick, but it was plagued with overheating troubles. He helped his son in his racing career, and Ray raced Go-Karts into his 70’s.
Ray Harroun, the very first winner of the Indy 500, passed away in Anderson, IN on January 19, 1968, just days after his 89th birthday. He is survived by his son Richard and family.   (1879 - 1968)