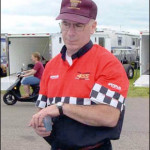 Don Holben was born in Lansing, Michigan in 1950, and has lived in Grand Ledge for a great number of years. Don’s first exposure to drag racing was in 1963 when he attended a drag race at the now-defunct Onondaga Dragway. By 1966 at age 16, Don started to regularly attend the drags by crewing for Al Moon, who raced a Modified Production Chevy Nova. Don, while still helping Al Moon, also attended his first National Event that year, the AHRA Grand Nationals at Detroit Dragway, and certainly became more hooked on drag racing, seeing it at the professional level. In 1968, Don became personally acquainted with Dick Griffin, whom he had been aware of for some time prior. Dick was the founder of the famed Chevair Racing Team of Lansing, and Dick Griffin was soon to become Don’s drag racing mentor and tutor.

That same year, Don graduated from Grand Ledge High and also went to US 131 Dragway to see some Funny Car shows. These continued “dosages “ of drag racing exposure drove a young Don to want to obtain his own Stock class car. By 1971, Don bought a 1969 Chevelle to race in Pure Stock, winning his class title at local tracks often, and even managing an overall eliminator runner-up once in this first season competing as a driver.
In ‘72, Don built another Chevy combination for Stock, a ‘66 Bel-Air 283, it being by Don’s own admission, an eminently forgettable effort. 1974. The mentor-student relationship began with Dick Griffin, and with Don racing a brand new 455 Cutlass wagon Stocker that season, Don won the US 131 Popular Hot Rodding Magazine Nationals Warm-Up Meet, his first major win. He was on his way to a racing history record to be envied... 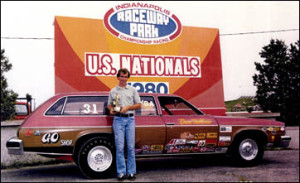 In addition to the above, Don also won his individual class title at the NHRA U.S. Nationals at Indy EVERY year from 1976 to 1988! In 1996, Don obtained a new LT1 Firebird and has worked with and raced this car to the present, with friend and fellow racer Tony Goodman also driving the car. Don has also driven a ‘69 Camaro stocker owned by Holland’s Phil Veldheer.

Don Holben has had a drag racing career that most would covet, and there is even more to Don’s career that is in excess of the space allowed here. Don is quick to thank those who have helped, influenced, inspired, and supported him over the years. They include: Jack McCormack, Dick Griffin, Dick LaHaie, Al Provoast, Dale Smith, Al Moon, Don McElroy, Dick Fortman, Greg Luneack, Bob Haughton, Tony Goodman, Al Seger, Tom Erb, Arlen Fadely, Harry Doolittle, Phil Veldheer, Bob Huettman/Rey Argenta/Steve Ambrose, and many more.
After serving on the Board of Directors for many years, Don passed away on September 19, 2022.