We have 227 guests and no members online 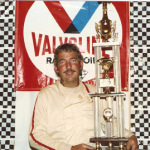 Bob Holley’s interest in racing began when he went to B & K Speedway, Kalamazoo, with his family in the late 1960’s and early 1970’s. He began his racing career in 1976 in the Sportsman Division at the local tracks of Kalamazoo, Hartford and Berlin. In ’77 he was the winner of the Hoosier Showdown at Hartford. Along with several feature wins Bob was the Sportsman Track Champion at Berlin in ’77 and at both Berlin and Kalamazoo in ’78, driving for car owner, Paul Fitzpatrick.
Bob took a break from racing in the early 1980’s and returned in ‘88 to drive for two years in the Late Model Division for car owner Bill Myslewiec , adding several top ten finishes at Berlin to his resume. In ’90 he was the winner of the first annual S.C. Nationals at Angola Speedway, IN. and he also won the Late Model Championship at Kalamazoo once again driving for car owner Paul Fitzpatrick. In ’93 Bob accepted a ride offered by car owner Bill Ponstein with the car and equipment still housed at Paul Fitzpatricks garage. The ’93 season ended with a second Late Model Track Championship at Kalamazoo. 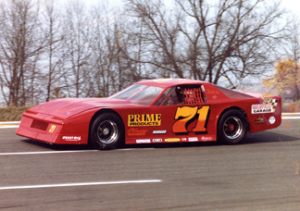 1994 thru ’96 Bob had several feature wins at Berlin. He was crowned Late Model Champion at Berlin three years in a row…’96, ’97, and ’98 with the crew of Larry McKibben, Steve Laws, Butch Glass, and Dean Rantz.
Holley’s most memorable race happened at the Kalamazoo Speedway. “I won the Kalamazoo Klash, which paid us $15,000. The funny thing about it was that we ran Berlin Raceway all that season, and when we ran the Kalamazoo Klash, we had to set the car up all different for that one race.” He stated, “The race was run in two separate 100-lap segments, and we took the lead at about lap 60 of the first segment and won that segment, and then led the second 100-lapper for the overall win. It rained that evening, and we had to wait until the next night to finish the Klash. The car was handling just awesome for me. I had to give credit to Larry McKissen, and my car owner, Bill Ponstein, and my crew for setting the car up for me.” 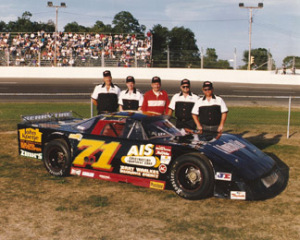