We have 29 guests and no members online 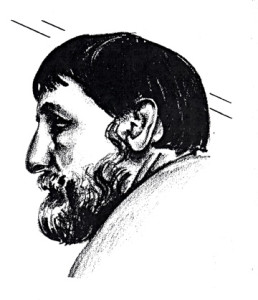 With the death of Ed Jones in September of 1975, Michigan auto racing lost a leader whose career and contributions to the sport covered over 30 years of active participation.
Ed’s involvement in auto racing dated back to before WWII, when as a youngster of 14 he fixed bicycles in the corner of an older brothers garage on the east side of Detroit. The older brother owned and drove a race car at the old Motor City Speedway located on 8 Mile & Schoenerr, and it wasn’t many years before Ed convinced his brother that he should get his chance behind the wheel, as he had served his time as the chief “go for” for the crew. WWII closed auto racing and Ed was drafted and sent to the Aleutian Islands off the coast of Alaska, where he spent his hitch in the army.
When the war ended Ed returned to the Detroit area and resumed his activities in the world of auto racing. A regular at the famous Partington Pastures, located in a farmers field just south of Romeo, Michigan, and at the Motor City Speedway. Ed met and married Ruth Hintz of Detroit during his early racing days. Ruth was to become Ed’s business partner and remained active in what became a family business for the Jones family.
Ed Jones had a personality that attracted many people, and in the early 50’s Ed was elected by his fellow drivers to lead the Michigan Modified Stock Car Racing Association, which at that time was bigger than NASCAR. In the 1951 season MMSRA sanctioned 110 racing events for purses totaling $110,000.
In 1953 Ed organized the Continental Auto Racing Society, which sanctioned races all across Michigan. As officiating and sanctioning duties grew, Ed had less time to pursue his driving interests and in 1957 he retired as an active driver.
His duties as an official and promoter had seen him turn a horse racing track into one of Michigan’s finest auto racing facilities with the opening of Mt. Clemens Race Track. His success at the Mt. Clemens track attracted the attention of a group of investors who were about to purchase the Dixie Motor Speedway. Ed was invited to purchase part of the operation and become its manager. Over the years Ed took over the operation and by the mid 60’s he and his family were the owners and operators of the facility.
During the late 50’s & early 60’s Ed also sanctioned events for CARS at a variety of racing facilities across the state. Running events at Jackson Speedway and the M-59 Speedway in Pontiac.
In the mid 60’s Ed bought the Owosso Speedway and turned his efforts to reopening the high banked half-mile. In 1968 he sold the Dixie Speedway and directed his total efforts to operating Owosso facility.
In the late 60’s and early 70’s Ed put together some of the first cooperative track programs involving more than one track. Clarkes Speedway and the Mt. Pleasant Speedway put together the Diet Circuit, then Owosso, Spartan, and Jackson offered drivers 3 nights of racing with a sponsorship and point fund from the Carling Brewing Company.
Promoters across the state began to see and understand the advantages of cooperation and in 1972 when efforts to organize a statewide promoters association were headed up by Ed Jones and Jack Doering, Ed again found himself in a position of leadership.
It was Ed’s personality and ability that got the Michigan Speedway Promoters Association going in the direction that has made it a unique organization that is still active today.
Ed Jones was respected and loved by drivers, fellow promoters, officials, and race fans, and his passing in 1975 in many ways signaled the end of an era in Michigan racing.