We have 971 guests and no members online 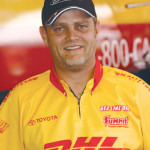 Scott Kalitta, a two-time NHRA POWERade Drag Racing Series Top Fuel champion and one of only 14 drivers in NHRA history to earn victories in both premier nitro categories, earned 18 victories during his career, his last coming in Chicago in 2005 in Top Fuel.

Kalitta earned most of his racing success in Top Fuel, where he claimed back-to-back world championship titles in 1994 and 1995. He retired from racing in 1997, sitting out most of two seasons before returning for a 10-race campaign in 1999. He sat out three more seasons following that brief stint and then returned again in 2003, joining cousin Doug as a seconddriver for the family’s two Top Fuel dragsters. 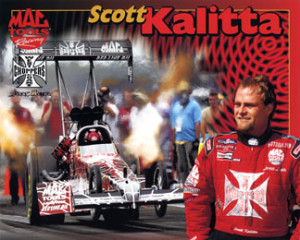 Kalitta started his pro career in Top Fuel in 1982, running limited events for four seasons before moving to Funny Car in 1986 for his first full season of competition. He returned to that category full time in 2006. He posted a 36 runner-up finishes in his career.

Funny Car driver Scott Kalitta, 46, died June 21, 2008, from multiple injuries suffered after his car went out of control and crashed in a high-speed racing accident at Old Bridge Township Raceway Park during the fourth and final round of qualifying at the Lucas Oil NHRA SuperNationals. Kalitta was extracted from his car by NHRA emergency services officials and transported to Old Bridge Township Hospital, where he was later pronounced dead.