We have 279 guests and no members online 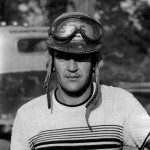 Charles R. “Rusty” Kelley was born May 17, 1929. He started his racing career in California by working on Midgets. He then started his driving career in 1949 when the driver didn’t show up. He moved to Pontiac, Michigan in 1952 and met Chet Skiba, the owner of Northside Auto Parts. Rusty built three race cars. The three drivers were Rusty, Chuck Partello and Benny Howell. All three were owned by Northside Auto Parts. Rusty’s car was a 1937 Chevy.
Rusty went on to run the modified hardtops and midgets. 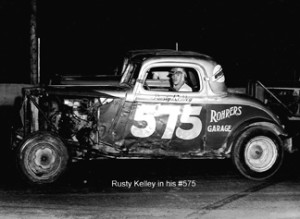 He set track records at most tracks he competed at and received honors from NASCAR for going 127 mph on the beach at Daytona. That made him a member of the coveted Century Club at Daytona Beach. He was a member of MARC and the Land O’ Lakes Auto Racing Association.
He was a frequent visitor to victory lane at his hometown track, Pontiac Speedway, which also known as M-59 Speedway. He was the M-59 champion in 1956 and the 1957 track champion at Jackson Motor Speedway the following year.
Rusty Kelley was fatally injured in a flaming crash at Toledo Raceway Park on April 13, 1958. He died of a broken neck when his car tumbled before catching on fire. He had broke his neck twice before in separate accidents.