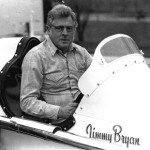 Jack Layton has been involved in Michigan motor sports his entire adult life. Jack's first car was build by himself in 1957. It was a Pontiac powered Sprint Car. This car was campaigned successfully in the Michigan area with Red Camp as the driver. Later in the 1858 season, the engine was changed to Chevrolet power. The second car that Jack had was the Vern Ottmar number 66 out of Ann Arbor, MI. The car was built in 1956 and competed with a Wayne Chevy 6 Cylinder engine. Jack got the car from Vern in 1959 and put a Chevy V8 in it and contacted Norm Rust from New Hudson, MI to drive the car. The combination of Layton and Rust found success racing with IMCA, as well as tracks in Ohio, Indiana, and Michigan. In 1961 Jack decided to have Rust attempt to put the car into the field for the Little 500 in Anderson, IN. Rust immediately went out and broke the track record previously set by A.J. Shepherd. The interesting thing about the new record set by Rust was that Layton had 3 two barrel cars under the hood. That was considered unusual during the time of fuel injected engines. The car was later sold to Art Braithwaite.
Jack's ability to extract horse power from Chevy V8 engines in the early 60s actually started him into a part time business called Jack's Custom Shop. his specialty was porting and polishing heads. The testing and development of his engines were done in his own race cars at the local tracks, Dixie, the Speedrome, Lansing and many more. It was not long and people started to notice that Jack's engines were very potent and the orders started to come fast. 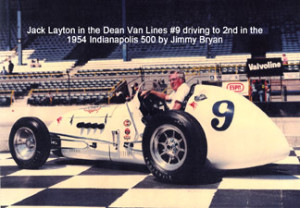 In the late 60's, Jack got out of the circle track scene and built a wheel stand drag machine called the Mystery Mover. This Corvair Van Truck would run the 1/4 mile with the front wheels high in the air and ran against the likes of Bill "Maverick" Golden and the Little Red Wagon and Bill Shrewsbury and the Hurst Hemi Under Glass. The other interesting thing about the vehicle was that jack would not disclose the power plant (thus the mystery mover). No one knew just what made the thing go. This created a lot of curiosity among the fans. Many thought because of the sound it was an Offy, but it in fact was a 472 cubic inch Pontiac, with 180 degree headers.
By the late 70s and early 80s, Jack continued his motor sport activity with his interest in race car restorations. The list of cars that he restored are: 1952-53 Bill Painter Sprint Car #47, the Lempelius Offy Sprint Car #52, 1956 Vern Ottmare, Dean Van Lines Champ Car #9, Hun Robbins Indy Roadster #73, Speedy Helms #3 Sprint Car, #21 Clark/Cathera Chevy V8 Sprint Car and others.
Jack was also successful in a business venture called Customer Fun Machines in Howell, MI. The business sold Rupp Snowmobiles and Suzuki products. Jack and his son were active in racing modified snowmobiles and competed successfully against the factory teams.
Jack also founded the Vintage American Race Car Club. The VARC is very successful and is still an active club. Jack died in 2004 and is survived by his wife Vaughna.