We have 197 guests and no members online 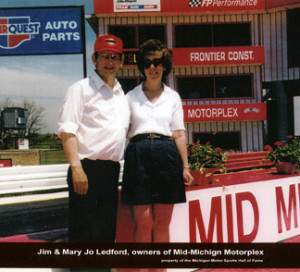 Jim and Mary Jo Ledford have been involved with drag racing since 1965. First as competitors, and then as racetrack owners and operators. Jim started his driving career at the old dragstrip in Brohman.
They bought Manistee County Dragway in Kaleva in May of 1970 and ran it for 5 1/2 years. They bought the dormant Central Michigan Dragway in Stanton in the late summer of 1975. They knew they had a big job ahead of them. Their object was to put Central Michigan back on its feet again. Endless hours of dedication and hard work starting making some noticeable changes around the track. Soon, the original two staging lanes grew to ten. A nice tower was built, bleachers were added, move paving, more painting, constant grooming of the grounds and keeping a cheerful relationship with the racers all paid off in the long run.
A NHRA division 3-point meet was awarded to the Ledfords, and in 1981,Central Michigan Dragway was awarded the NHRA track of the year. In 1985 Jim and Mary Jo retired from promoting and took over the Parts Plus store in Edmore. This allowed them to go back to racing their cars with sons/drivers Jeff and Mike at major events across the USA, with Jeff winning the IHRA Top Dragster World title in 1992. Then in October of 1992, the Ledford family returned to Central Michigan Dragway. By the spring of 1993 the track and all of the return roads were paved. A new Compulink Timing System was installed; all new lighting and an improved PA system were in place. Along with the improvements came a new name for the track, Mid-Michigan Motorplex. 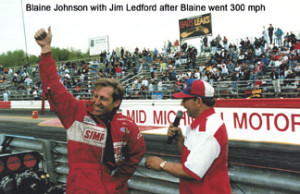 The Ledfords continued their improvements to the track in 1994 as modern restrooms were added along with additional paving.
In 1996, when Top Fuel Dragster driver Blaine Johnson set the track record at 4.68 seconds (307 mph), Mid-Michigan became the fastest non-national event track in the nation. Tragically, Johnson was fatally injured in an accident during the NHRA U.S. Nationals later that summer.
Big changes were in store for the 1997 season. First off, the track became an IHRA sanctioned track. Then the Ledfords secured a major IHRA National event at the Mid- Michigan Motorplex in 1997. The annual Northern Nationals was hosted at Stanton in August. Along with the major event came a new state-of-the art timing tower/viewing suite complex, dedicated to the memory of Blaine Johnson. In preparation to the major event, new staging lanes were added, and a longer concrete launching pad was poured. 1998 saw the progress and improvements continue, and the return of the major IHRA events. Late 1997, and into 1998 also was witness to Jim’s brave battle with a reoccurrence of heart-related health problems. Sadly, on December 21, 1998 at age 55, Jim Ledford passed away. Mary Jo, with her sons and their families, and the Motorplex crew, will carry on the vision of Jim Ledford, to make one of Michigan’s oldest dragstrips the best track in the state, if not one of the best and respected in the country.