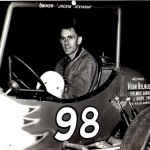 Jack Lindhout from Grand Rapids started his racing career in 1955 at Berlin Raceway Over the years he competed in the jalopies, super modifieds, midgets and USAC sprint cars.
He has won at least 200 feature events and gathered three season championships at the Grand Rapids Speedrome. Two in the coupes and one in the midgets. In the coupes he used to run a Hudson. He is currently in the process of restoring an early 1950's Hudson. 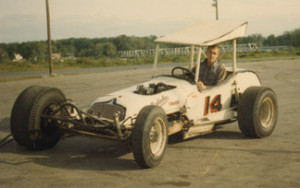 Over the years he had won many special races, Mid-Season Championships and the like, bu the biggest win got away as he once was leading the Oswego Classic with 24 laps to go when something went wrong.
He has raced at over 50 different tracks in Michigan, Indiana, Illinois, Ohio, Kentucky, Pennsylvania, New York and Ontario.
He retired from racing in 1982 and moved to Las Vegas, Nevada in 1983 to become a shift boss in a casino. He retired from that casino. Jackie Lindhout died October 6, 2012.  (1931 - 2012)