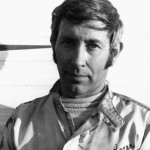 Johnny Logan, a lifelong resident of Charlotte, Michigan, started his racing career in 1948. A few short weeks after seeing his first jalopy race, he was competing in this popular form of racing. Success came quickly for Logan and he was soon recognized as a hot shoe at the various tracks throughout the state.
Logan's natural ability at the wheel took him to the top of the sport as the jalopies evolved into modifieds and then into super modifieds. During this golden era of Michigan racing, John was competing five nights a week and, as always, holding down a full-time job as a tool and die maker.
As they super modifieds were refined into the thoroughbred racers that they were, most of the drivers and cars specialized in either dirt or pavement. Logan was, and remains one of a handful of racers at home on both surfaces and won many races on each type of track. 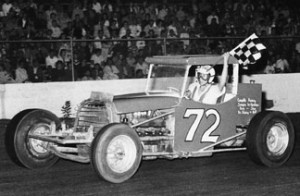 By the early sixties and through the mid-70's John was one of a number of Michigan drivers to "invade" the New York and eastern seaboard's super modified racing scene. These Michigan racers so influenced and dominated the eastern racing that Logan was stretching his racing weekend as far east as Connecticut to race a 3-day circuit and return to work Monday morning.
Johnny Logan has raced super modifieds, sprinters, midgets and stock cars from Daytona Beach on the sand, north to Canada, and from the East Coast to Arizona. He is known as the toughest of competitors and a man of his word who gives a helping hand when it is needed most.
John is one of an elite few racers to compete in a sprint car race on a super speedway: In 1964 John was initially declared the winner of an IMCA race held at the Atlanta International Raceway. At a later time IMCA took this away in a very controversial decision.
Logan has driven for most of the top open wheel car owners in this and other states and a list of those owners reads like a who's who in racing roll call. 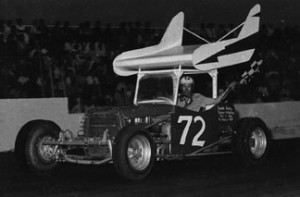 Logan has spent most of his career traveling to the better-paying races, wherever they might be, and he usually wasn't a points type racer. In the late '70's, however, he did concentrate on the Sandusky super modified class and dominated the action at this track for several years in an upright sprint car, while the track's established car was the radical offset roadster.
In racing's inner circles, when the talk turns to racing as racing should be, the name of "Logan" is invariably brought up as one of the ones "the best are judged by".
As much as Logan loved racing, he has always placed his family and job first. He lives in a home he built within a few miles of where he was raised. Although his home contains over a hundred trophies he has won, he considers the friends he's made racing more important and would rather talk of other racers than of his own considerable achievements.
Johnny Logan died at the age of 79 on September 8, 2008.   (1929 - 2008)