We have 139 guests and no members online 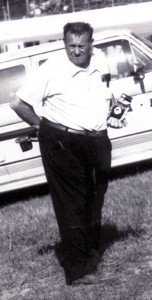 Ray Rogers, was born January 6, 1921 in Ohio and moved to Grand Rapids, Michigan in 1946. His still photography provided a service to auto racing for nearly 25 years. Ray’s interest in taking photos of all the drivers at each track he visited will be a valuable asset to auto racing history for years to come. Although his photos were primarily posed photos, each was taken with care to accent the driver and his machine. These were the type of photos the competitors and fans alike came to expect from this gentle giant of a man.
Ray Rogers was truly a generous man. His willingness to give of himself for auto racing’s sake was an inspiration to all. He never made a fortune off racing, breaking even at best. But it was his way of being involved with the sport he dearly loved. Over the years his photos graced many of the racing publications including National Speed Sport News and MARC Times.
The auto racing bug bit Ray as a teenager while living in Ohio. He was a star athlete in high school and attended Ohio State University on a full basketball scholarship. He quit school to join the special services when World War II broke out. He served his country as a MP from 1941 until 1946. 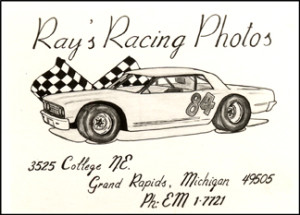 In the early 1960’s he wanted to become more involved with auto racing and began taking photos at various tracks in the Grand Rapids area. In 1964, when the Grand Rapids Speedrome expanded to a 1/2 mile paved track, Ray became their track photographer. He continued in that position until the track had to close in order to make room for the US 131 Expressway in mid-1966. He then switched over to Berlin Raceway the following year and remained Berlin’s track photographer until his unexpected death on November 20, 1987. Over the years he also served as track photographer for Kalamazoo Speedway, Hartford Motor Speedway, and Ionia County Speedway. He would also travel to special events including yearly excursions to Oswego, NY, Heidelberg, PA, and Daytona, FL. Ray attended many oval tracks throughout the Great Lakes States.
Ray began working for the Pere Marquette Railroad in Grand Rapids shortly after his release from the service. He continued working on the railroad until an injury forced him to retire in 1978. Ray and his wife Roberta were married 40 years. Ray Rogers is one of the most deserving ever to be nominated into the Michigan Motorsports Hall of Fame for his dedication and preservation of auto racing history.  (1921 - 1987)