We have 158 guests and no members online

The Ramchargers were initially composed of engineers, technicians and car buffs employed at Chrysler Corporation in 1959. The "High and Mighty", a modified Plymouth Coupe, entered in the 1959 Nationals, initiated the type of innovations and performance levels associated with the Ramcharger's Team. The familiar white and candy stripe identification was first used on Super Stockers of the early 1960's. The Ramcharger's Super Stock and FX Super Stockers of that era were driven by Jim Thornton and Mike Buckel. Although they rotated driving chores, Thorton was the primary driver. The Detroit area based Ramcharger's Team was credited with many of the sport's firsts: 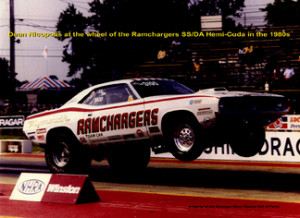 The quest for innovation was rewarding since this team was the first to break the 9 second barrier with a stock bodied car, the 8 and 7 second barrier with a Funny Car, and the 6 second barrier with a Top Fuel dragster. The list of drivers for these Top Fuel entries reads like a "Who's Who" of the sport. In chronological order, Dan Westerdale, Chuck Kurzawa, Leroy Goldstein, and Clare Sanders all provided excellent driving/record setting performances.