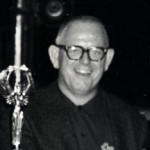 Born in Canton, Michigan, Chuck McClung began racing cars in 1958 at several racetracks. Some of Chuck’s drivers were Jimmy Nelson and Cy Fairchild. The rare times that Chuck drove himself found him in victory lane such as winning the mid-season championship at Zilwaukee Speedway in the late 50’s.
It was in 1958 that Chuck founded the Flint Auto Racing Club, trying to get rules set up to cut the cost of racing.
Then in 1960 McClung joined forces with Jack Doering and assisted in managing and promoting Auto City Speedway.
It was in 1967 that Sandusky Speedway beckoned and Chuck started promoting there. After suffering a heart attack he returned home to Flint. 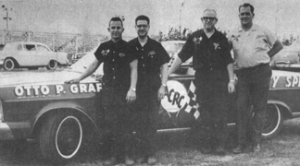 Still not content to be a spectator, it wasn’t long before he went to work for Ed Jones at Dixie and Owosso Speedway as race director.
Chuck next became involved with Allovette snowmobiles becoming their area rep and director of their factory racing team in Michigan. In 1969, Chucks son, Danny, won all 73 races he started. The final race of the year was the North American Championship held at Lake Nepessing. He won five semis to make the feature, and then won the feature over Tom Marks and Sammy Sessions.
When Ed Jones and Jack Doering were trying to get the MSPA off the ground, Chuck was consulted for his knowledge. He met with Carlings Beer and got them involved with the MSPA Racing Series as a sponsor and the series was on its way.
It was in 1979 that McClung managed to persuade Busch Beer to become involved with the MSPA as a sponsor. For all his efforts on behalf of the MSPA, Chuck was made a lifetime member of the MSPA. 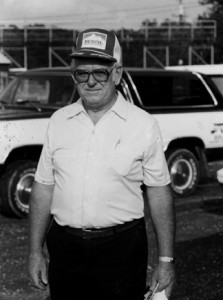 1981 found Chuck being made the executive director of the MSPA and it was also this year that he had to have open-heart surgery and then gave his family and friends another scare when he had another heart attack during the operation and his lungs collapsed. Put on a machine for five days, Chuck regained his will to live and decided to get well and go racing again.
In addition to all of his other involvements in racing, McClung next served as President of the Michigan Motor Sports Hall of Fame. It was his calm and cool way of working under stress that has helped keep this organization together during some difficult periods.
The thing that makes a person rise above the crowd is his ability to pick himself up after being knocked down and Chuck McClung had done that several times in his life. One aspect about Chuck McClung is that he had never gotten bitter about his setbacks. He went right back to work and analyzed what went wrong and what he had to do to get going again and with a smile on his face put one foot in front of the other and took the first step back to where he wanted to be. That’s a pretty good definition of a winner!