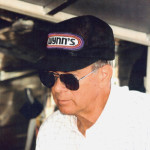 Jack McCourtie was born on July 8, 1932, and is a life long resident of Jackson, Michigan. His interest in boat racing was sparked at the age of 13. He raced for the first time at age 15 on Price’s Lake (east of Center Lake) in 1948 using a 2 cylinder, 5 horsepower Evinrude “Elto” on a “J” class boat. In 2001 he competed in his last race at the Dayton, OH Hydroplane Regatta driving a 15 cubic inch American Hot Rod on an “A” Modified runabout. He was 69 years old and had accumulated 54 years of racing.
Boat racing is still Jack’s great passion in sports. He designed and built his own boats for the “J”, “A”, “B”, “C”, and “15 super stock” classes, never racing a factory built boat. Most of the mechanical work on the motors and propellers were done by himself. He designed the first cleaver propeller used by Chuck White and Ray Mason. He also designed the first square nose runabout race boat, incorporating the first integrated deck and cowl used on a runabout race boat. 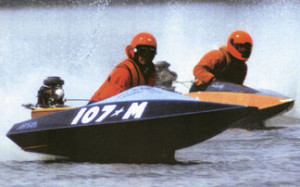 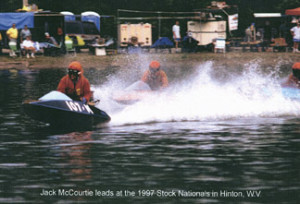 He competed in the Top O’ Michigan 87-mile marathon races 31 times. He last won the event as “B” stock runabout champion in 1997 at age 65. Two years later he was the Regional and Divisional “B” stock runabout champion as well as the North American Champion in “A” modified runabout.
He attended Michigan Center High School and graduated with the class of 1950.
During his service in the Armed Forces from 1952 to 1954, he spent two years in Germany.When he returned home, he attended Ferris Institute College in 1955 and 1956 and worked for the New York Central Railroad as a fireman for five years.
Aviation is also one of Jack’s interests. He attended Jackson Community College for ground school.In 1979 he earned his private pilot and seaplane license, and has since logged over 2000 hours, most of them with his wife Ginny. They are the parents of Lorie, Kevin, Don and Cheri. Three of their children reside in Michigan and the other in California. Jack passed awai in 2020