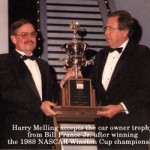 Harry Melling, from Jackson, became involved with racing in the 1970's when his Melling Tool Company began sponsoring race cars at Jackson Motor Speedway and Butler Motor Speedway. Bill Younkins was one of his first drivers. Melling then got involved in NASCAR Winston Cup Racing in 1980 by sponsoring Benny Parsons. In late 1980 and all of 1981 he sponsored Parsons and Bill Elliott.
Melling Tool was founded in 1944 by George and Ben Melling, the grandfather and father of Harry. Harry was born that same year. His father and grandfather began by tooling for the war effort and then switched the emphasis to building oil pumps for Ford engines after the war. Harry started working in the family business when he was 12, and became the president of the company in 1975 and continued building the company, establishing warehouses in various locations across the country and Canada. It was Parsons who suggested to Melling he should buy Elliott's team. Melling once quoted, "Benny had a lot to do with it (the team purchase), He told me that was a good team to help. Everything seemed to fall in place."
On December 1, 1981, Harry Melling, President of Melling Tool Co. bought the Elliott Race Team and changed the name to Melling Racing. From that time forward the following reflects the career highlights of Harry Melling in NASCAR Winston Cup Racing. Here are just some of the highlights of the Melling and Elliott team. 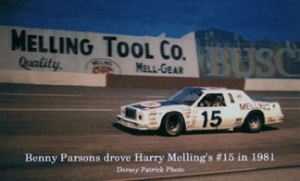