We have 975 guests and no members online 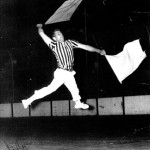 Jimmy Meyer started his racing career in 1954 at the old Airpark race track in Douglas, Michigan. He had helped the flagman flag a few races, and in 1955 Floyd Kamps from the Grand Rapids Speedrome called one night to ask if Jimmy could help him out. Kamp's flagman had broken his leg, and he needed a flagman. Jimmy made a deal that if he liked the work, he could continue to flag for the Speedrome. That really started his career of flagging. He worked at the Speedrome from 1955 until the closing of the track in 1966. That same year Dick Zimmerman, the former flagman at Berlin, was killed at the track and Chet asked Jimmy to flag at Berlin the following season.
While flagging at Berlin, he also worked the Outlaw Sprints at the I-96 track for one season. Since his move from the Speedrome he has been flagged at Berlin until the present. He quit racing three times in his career, but has always gone back to Berlin.
In his early career, Jimmy had an unique style of starting each race. He used to start from the inside of the track, and as the cars came down the front stretch to take the green flag, Jimmy would jump high into the air and wave the flags much to the delight of the fans. 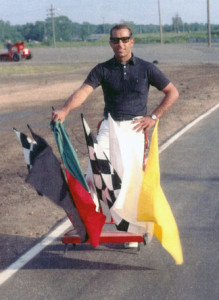 In his 42 year career, he has had the opportunity of flagging most types of race cars, everything except Indy Cars. Starting with 32 Fords, he has also flagged USAC Midgets, USAC Late Models, Super Modifieds, SOD Sprints, New York Modifieds, and Late Model Cars including Artgo and ASA.
Some of the famous drivers that that have flashed under Jimmy Meyer's flags include Gordy Johncock, Sammy Sessions, Norm Nelson, Norm Brown, The Sennekers (Bob, Rich, Terry, Pete) and the Bensons (John Sr. and John Jr.).
At his induction, Jimmy thanked the Michigan Motor Sports Hall of Fame for being interested in his career. He added, "just being thought of is an honor in itself."