We have 925 guests and no members online 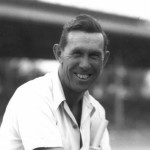 Al Miller called Detroit his hometown but he spent the last years of his life near Standish, Michigan owning and operating a gas station.
After several years of motorcycle racing successfully, Al lost a leg in a racing accident so he turned to auto racing. His first attempt to be first in the Indianapolis classic was in 1932. His best performance was in 1934 when he placed the Shaffer 8 Special in 6th place. He continued up through 1950 and only missed one race because the car was not ready to qualify in time. 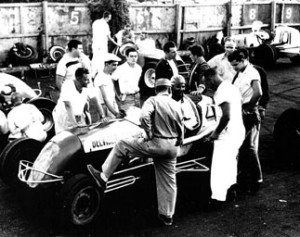 In 1947, Al took over the Tucker Torpedo, a rear-engine creation, with the driver sitting well up in front of the chassis. It took a special skill to handle it and Miller had that very talent, as his 124.848 MPH qualifying time proved.
Al was an avid jokester, and thoroughly enjoyed the way fans in the grandstands reacted when he was involved in an accident that pinned his artificial leg in the cockpit of the car. He promptly unhooked the leg and stepped from the car unscathed, but with the empty pant leg, it looked really bad. He loved to tell this and many other such stories until the day he died.
He was a devoted husband and father, a great mechanic and a credit to auto racing with a winning personality.  (1908 - 1967)