We have 241 guests and no members online 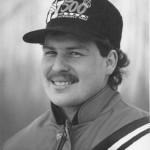 Snowmobile Racing’s Hall of Fame in St. Germain, Wisconsin is a place filled with heroes. Great men and women who’s dedication to snowmobile competition both on and off the track have the sport what it is today. Brian Musselman a legend in the sport of oval track endurance racing throughout much of the 1980’s, became a part of this unique fraternity January 15, 1998. His induction marks the second time an enduro racer has been enshrined. A native of Hope, Michigan - Brian grew up with the snowmobile industry as a member of the International Engineering (Woody’s) Family. His father Jim started the Snowmobile Traction and Control Products Company back in 1968 with Woody Coslow. Snowmobile racing just seemed to be a natural extension of the business. By the time he became a teenager, Musselman was hooked. 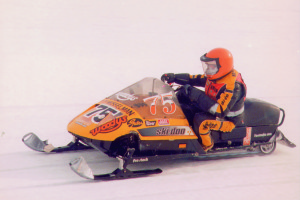 In 1978 “Team Woody’s” made their professional debut running an Arctic Cat El’ Tigre 6000. The team traveled the popular Michigan enduro circuit - enjoying moderate success. However, their goal was to win the Soo I-500. At age 16, Brian became one of the youngest drivers to ever race at the Soo. Team members in those early years included; Jim and Marlene Musselman, Joe Brady, George Shull, Mark Musselman, Gary Loar and Tim Clark. Their first I-500 entry almost made it through the complete race before going out with a blown head gasket. The following year the team retired their Arctic Cat in favor of a new Polaris RXL. Brian was not allowed to race at the Soo due to a new restriction, which put the minimum driver age at 18. 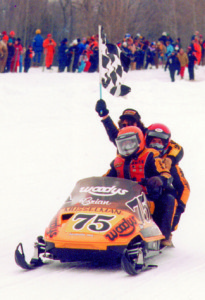 After losing the Polaris to an accident, the team went to work on a new sno-pro Arctic Cat, getting it ready just in time to qualify for the I-500. Brian and Mark ran the Cat until the team’s brief retirement following the loss of their close friend Robert Dohm Jr., who was killed in an accident while qualifying for the 1981 Thunder Bay 250 in Alpena, Michigan. Brian still wanted to race and headed out west the following season to run the sno-cross circuit. It was during this time that he met up with Gerard Karpik, and discussed the idea of running the Soo with a new Ski-Doo prototype. After weeks of fine-tuning the sled Team Ski-Doo arrived at the Soo for qualifying. When the race started, Musselman was back in the saddle ready to run the I-500 once more, thus beginning a long prosperous career. A race strategy is very important in enduro racing. Brian gave a great deal of credit for the team’s success to his father Jim Musselman, who developed the game plans for every race they ran. The pit crew played perhaps the biggest roll in the success of “Team Woody’s”. Even before going to the track the team would practice their pit stops to make sure everything would move as smooth as possible. A lot of teams will show up at the track and quickly round up a few guys to help out; this is not the way to become a winner at the Soo or at any other enduro race, Musselman once explained. Brian was very successful as he won the Soo I-500 three times (1982, 1984 and 1985). Brian raced his last Soo I-500 in 1986 where he finished 16th on a Ski-Doo with 351 miles completed.
During his brief career, Brian Musselman had accomplished what many drivers only dream of. In addition to the I-500 victories, Musselman won two Midwest International Racing Association - M.I.R.A. Point Championships along with victories in the Albright Shores 300 and the Lincoln Lions 250. Team Woody’s officially disbanded at the end of the 1986 season. However, Brian remained active in the sport briefly, running a second Ski-Doo entry for the Williams/Benner team. He officially closed out his career in 1989 after a short run with his own Arctic Cat. Brian started racing at age twelve aboard a Polaris Colt at the Gladwin County Ice Carnival. During his racing career, he completed on Mercury Sno Twisters, John Deere, Roloflex, Arctic Cat and Ski-Doo. His two-time Soo I-500 winning sled is now on display at the International Snowmobile Hall of Fame. Brian Musselman’s Winning Record:
Musselman Firsts: