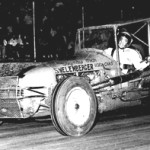 Jimmy Nelson from Flint was one of the best oval track drivers in Michigan history. Jim was born May 19, 1930 and met a tragic end at the now defunct Grand Rapids Speedrome on August 21, 1965.
Jimmy started driving stock cars in El Paso, Texas while in the service. Nelson was small in stature (five foot seven and 138 pounds) but he had a heavy foot and was known as a charger from the drop of the green flag.
He moved up the ladder from the jalopies to the roadsters and then on to race super modifieds and sprint cars. He won numerous features and track championships. He was at home on both asphalt and dirt and possibly one of the most versatile drivers this state has ever had. 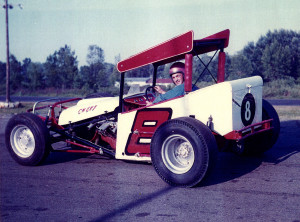 Nelson was known for being kind of cocky hot-tempered not quick to forgive and forget, but the week before his death, Jim lost his good friend Dick Carter at an accident at Berlin Raceway. After Carter’s fatal accident Nelson donated his winnings to Shirley Carter and instead of going to Berlin for the "Carter Memorial", Jimmy opted to go to the Speedrome because he could make more money for the Carter family.
One of the highlights in Jim’s career was finishing 3rd in the prestigious “Knoxville Nationals” in Iowa in 1963. He drove Bob Patterson’s 8-ball, which was a little better on asphalt. So in 1965 he took Carter’s usual ride (Doc Smalley’s 64 question) to Knoxville because it was better on dirt. But Jim wasn’t as successful as he qualified a disappointing 54th out of 96 cars. That same night Carter died at Berlin.