We have 968 guests and no members online 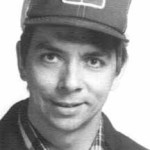 Ray Paquet from Holt, MI was born in Lansing, MI. His childhood was spent in DeWitt, where he first began tinkering with all things mechanical, beginning with go-karts and then moving on to cars.
He began drag racing in 1962 at Onondaga Dragway. He also raced at Central Michigan Dragway at Stanton. His first legit race car was a 1953 Chevy that ran in the N/Stock Automatic class. His next car was a 1951 Chevy with a stick shift.
In 1963 Ray switched to the brand he would later become synonymous with: Ford. He had three different 1957 models, all with the 312 y-block engine. He competed with one in the open class, and yet another in 1964 which he raced in the C/Modified Production class. He unfortunately wrecked that car late in the year. 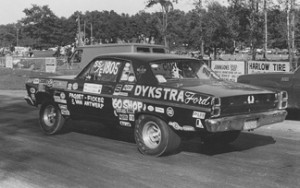 In 1965, he raced a 1963 Falcon Sprint with a modified 289 engine in the C/Gas class, and at about the same time, Ray also began racing a 1963 Ford Galaxie 427 in the Stock classes. He continued with these cars through 1966, and then late in that year Ray bought a red and very rare 1966 Fairlane “R-code” hardtop to compete with in the Stock classes. It was one of only 57 built, and Ray still has the car to this day. He raced this car for two years, and then wisely realizing its future value, put the car away for posterity. He then obtained a 1967 427 Fairlane to serve as the new race car, which he ran in A/Stock, B/Stock, and C/Stock through the 1971 season. 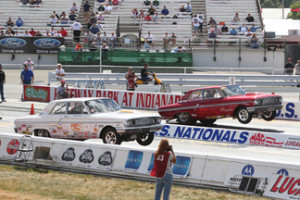