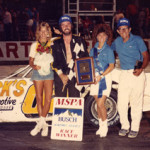 Bob started his racing career as a drag racer but switched to oval dirt track racing. According to his big brother Ron, Bob won approximately 450 races during his forty year career. Bob was a competitor in the MSPA (Michigan Speedway Promoters Association) from 1973 until 1985 when the organization ceased operations. His white and yellow #02 was afamiliar site at the MSPA races. Bob was known to his fans as “Big Block Bob” because he was one of the few drivers to use a big block Chevy engine under the hood. Bob always made time to sign autographs for his fans—especially the young ones. In 1995, Bob obtained his ARCA license. Two of Bob’s biggest fans were Phoenix and Faith—his two Great Dane dogs. His new fan is Ace, another Great Dane.
In 1981 Bob won every feature race at Ionia Fairgrounds Speedway. The same year he won numerous races at Butler Motor Speedway. The Fairgrounds put a bounty on Bob for any driver to beat Bob in a feature race. He was leading the points at Butler in 1982, when the promoter decided to drop the Late Models. He is married to his wife Deb. 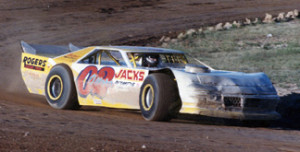 Other Cars Driven by Bob over the years