We have 740 guests and no members online 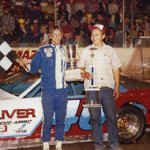 When Bill McGowan was young, he lived next door to a man who raced at the Grand Rapids Speedrome. Bill would watch him setup his car, and then go with him to the track on weekends. In the late 60’s, Bill was a mechanic on a car owned by Gale Rogers, which was driven by Bob Fellows. It was those experiences that formed his passion and talents for building and working on race cars.
In 1970 Bill built and owned his first race car, which competed in the 6-cylinder division at Berlin Raceway. In 1971, Gene Eding started driving for Bill and in 1974 they topped tier successes with a 6-Cylinder Division Championship at Berlin, which included in that year, winning 75% of all races competed in, including 10 out of 11 features at Hartford Motor Speedway, and 19 out of 26 features overall, including 2 Super Stock feature races at Kalamazoo.

Bill and Gail Cobb formed a co-ownership in 1976 in the late model division and won 5 features: two at Berlin, two at Galesburg, and one at Mottville. In the fall of 1979, Bill helped Jack Theeuwes (aka: J.T. Hof) compete in Winchester Speedway’s ASA “Pro-Wax 100” Late Model Sportsman race prior to the Dri-Power 4000, which they won. In 1980 Bill and Jack competed with ASA,  sadly ending in tragedy when Jack was injured at Winchester on May 26. Bill continued on the ASA circuit for 3 more years with drivers Dave Sorg, Jack Drolema, Brad Hulings, and Terry Senneker.
Bill returned to short track racing in 1983 as car owner and crew chief for Bruce VanderLaan. They compiled 51 feature wins and 45 second place finishes, with a top five rate of 40% and a top ten rate of 75%. They won Berlin Track Championships in 1985, 1986, and tied with Fred Campbell in 1988. They won the Toledo Series Championship in 1987 and 1988, with 2nd place finishes in 1989 and 1990. They also won an ARTGO 100 lap event at Berlin during this period.
Bill returned to ASA racing in 1993, forming a co-ownership with driver Harold Fair. Then in 1994, Bill joined Automotive Promotions, Inc, as Crew Chief. They won the ASA Rookie of the Year with driver Dave Sensiba. In 1997 they teamed up with driver Gary St. Amant, winning 25 pole positions and 14 feature races. They won ASA championships in 1998 and 2000, with Bill winning the Crew Chief of the Year Award for each. Other highlights were two Winchester 400 wins, and also wins at the Anderson 400 and the Minnesota State Fair. 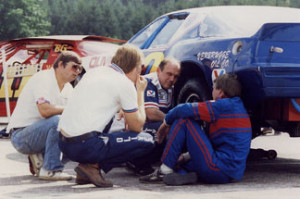 In 2003, Wal-Tom Racing hired Bill, and he and driver Robbie Pyle produced five ASA wins. 2005 again saw Bill joining with Automotive Promotions and driver Brian Campbell. They went on to win the 2005 ASA Rookie of the Year Championship. In 2006, Mike Blackmeer of Boyne Racing purchased the team, which produced five more ASA wins. In 2008, they won at tracks that had previously eluded them: Bristol, TN, The Milwaukee Mile, and the Nashville race.
In 2009 Mike Bursley of Perfect Circle Race Cars purchased the team, producing an ASA Late Model Challenge Series Championship.
Bill was born May 4, 1947 in Grand Rapids, MI, where he has spent most of his life. Bill married Carol Johnson in 1965, and they raised two daughters, Kimberly and Katherine. Bill died suddenly in 2011. They had eight grandchildren.