We have 955 guests and no members online 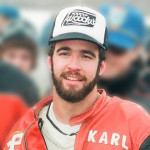 Karl Schwartz started racing in 1978 and is still racing today. He has raced Snowmobiles, Super Late Models, IMCA Modifieds and NAMRA Formula Indy Cars. His true love is snowmobile racing which he started doing in 1978. For the 2011-2012 season he was on the Factory Polaris team and drove in his 24th I-500 race at Sault Ste. Marie, Michigan. Karl has many wins racing snowmobiles, but his biggest accomplishment was winning the Triple Crown in 1982. He won the Alpena 250, where he finished 21 miles ahead of second place. That year he also finished 2nd in the I-500 and third at the Traverse City 250. His combined finishes gave him the overall Triple Crown title. 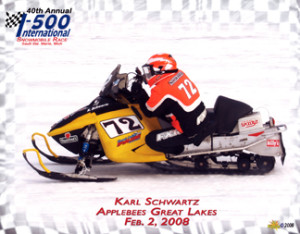 He also won the I-500 in 1984, and the Lincoln 250 in 1985. In 1992 he won the Bonnechere Cup Formula 1 Two Trac Race in Canada, beating the World’s best including auto racing’s Formula 1 as well as the World’s Snowmobile champion, Jacques Villeneuve. The following week he did it again by winning the Can-Am World Challenge. Most of the time Karl was the owner crew chief and driver in the sleds he raced, but with all of his biggest accomplishments was outside of racing when he was named Saginaw’s “Outstanding Citizen of the Year” for pulling six people out of a burning van. He saved their lives when they were involved in an accident on I-75. Karl also ran a Howe chassis Super Late Model at Tri-City Speedway. He had seven main event wins in the Late Model. He ran an IMCA Modified one year and had two wins. He then switched to Formula Indy Cars and won 12 of 16 races to become the NAMRA Champion in 1994.