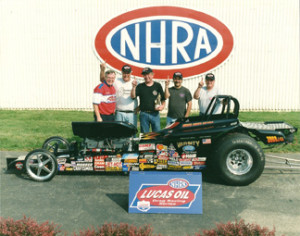 This Michigan-based and highly innovative drag race team has been a major force and competitive threat in the category of NHRA Competition Eliminator for many years. Childhood friends Steve Ambrose and Reynold Argenta, spent summer days pushing one another up and down the streets in an engine-less go-kart in their 1960’s Allen Park, MI neighborhood. This all in the shadow of Detroit Dragway, and the two likely did not imagine where this activity would eventually lead them. In 1968, Steve met Bob Huettman at Henry Ford Community College in Dearborn, where they were both studying to become auto shop teachers. This meeting set in motion yet another lifelong friendship, and a Ford-driven racing partnership with the three men that has endured many years. Eventually, all three would work at Ford Motor Company in engineering capacities, and also retire from Ford. 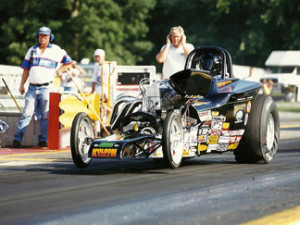 Their Varsity Ford-sponsored (Ann Arbor), 7.7-second, 170 mph ’23 Ford Model T roadster-bodied car that they have competed with for years, is indeed a marvel of much hand-crafted and truly innovative engineering. The J/AA class roadster utilizes a lightweight tube chassis by Kenny Bowers of Advanced Chassis, and a fiberglass ’23 Ford T roadster replica body. The unique engineering does not end there. The engine is a twin throttle-body fuel injected, inline Ford six-cylinder based upon the 300 cubic inch Ford Truck six with a final compression ratio of 17.7 to 1, featuring mostly hand-crafted components. At a time in the past, the team would painstakingly remove one cylinder section off of each of two Ford Boss 302 V-8 cylinder heads, fusing the remaining three-cylinder sections together to make a “V-8-style, inline six-cylinder” racing head. While very powerful and fast, longevity proved to be an issue with this concept. Eventually they approached famed Top Fuel Crew Chief and cylinder head manufacturer Alan Johnson to have an aluminum billet cylinder head CNC-machined to the team’s specifications. Fellow Competition Eliminator standout and MMSHOF Inductee Jerry Arnold finished the final porting work, himself an inline six-cylinder competitor and specialist. With Steve Ambrose as the driver, the AA&H team has amassed a record of major accomplishments that would make any drag racing competitor envious:
Sadly, in the fall of 2006, Reynold Argenta passed away suddenly. Steve and Bob carry on with great racing perseverance, as Rey would have wished