We have 501 guests and no members online 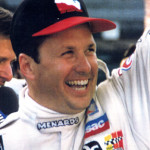 Scott Brayton started his love of racing early, age five to be precise, when he received a go-kart for his birthday. He graduated from go-karts to open wheel formula fords then an unprecedented jump to IndyCars. Anyone who has driven race cars competitively can understand the huge difference in horsepower and speed. To make this transition at age 21 made this even tougher.
Scott had a lot of success in racing, but it was his ever optimistic attitude that separated him from the rest of the drivers. Rich DeVos (owner of Amway, which sponsored Scott) once introduced him to a crowd of 25,000 Amway distributors as the brightest young man he ever met, coming from a man of his success this was a big day for Scott. Scott had just one podium finish in his 15 years that he competed in IndyCars, but he has set many records, one is that he is youngest driver to set in the front row for the Indy 500. He also won the coveted pole positions for the Indy 500 in 1995 and 1996, one of only nine drivers to accomplish back-to-back poles. Scott Brayton (2/20/1959 - 5/17/1996) was a winner in every sense of the word.

Here is a chronological list of Scott Brayton's career: