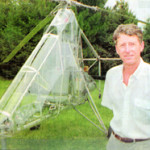 The huge crowd looked on, as the odd looking, futuristic gyrocopter taxied onto the runway on July 22, 1995, for the premier event of the National Rotorcraft Performance Contest held in Greenville, IN. With the brakes held on, the engine revved up. Suddenly, and to everyone’s amazement, the craft jumped straight up !! almost 30 feet off the ground. The small craft then started its horizontal transition into level flight and was off like a mad hornet and moments later, was out of sight. Everyone in the crowd was abuzz about what they had just witnessed. What had just happened was in response to a contest published years earlier for gyrocopters, an aircraft similar to a helicopter, except the air goes up through the rotor blades instead of down through for it’s lift. Gyrocopters use a “pusher” engine to push the craft down the runway to obtain lift under the rotor blades to fly.
The contest was to be held in consecutive years for the first gyrocopter to meet and fulfill many flight requirements including the shortest take off distance, climb exceeding height of 10 feet obstacle from 50 feet distance with least amount of ground roll, and minimum 200 flight hours, for a prize of $20,000. One year went by ... then 2 ... then 3 ... and still no one had a gyro that could meet the tough requirements. Four years later in 1995, pilots showed up with their gyrocopters to compete for the prize. Could anyone do these seemingly impossible requirements? This was tantamount to witnessing the first solo flight across the Atlantic.
Moments went by and soon the drone of the engine could be heard again. The craft shot by the finish line, entered the landing pattern and settled back onto the runway with no forward roll, meeting and/or exceeding the criteria to qualify for top position.
The rest of the competitors who had been lined up for their attempt rolled their gyrocopters back to their trailers in obvious forfeiture to compete against what they had not prepared themselves for that day. The designer, builder and pilot of this winning streamlined machine was Dick DeGraw , who would go on to claim the $20,000 prize, was the first to accomplish the world’s only jump-start gyrocopter, nicknamed “Gyrhino“. Dick had run a 20 mile course at an average speed of over 100 mph!. History was made that day. That year, NASA displayed his just start gyrocopter at the McCormick Place in Chicago’s “Technology 2005”, for new technology 10 years into the future. 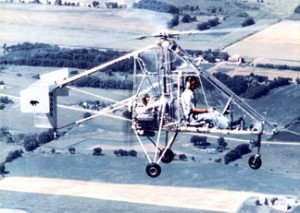 Dick’s innovativeness began in 1947 at age 6 when he first started experimenting with radios, clocks, and electrical motors. At age 10, he built his first oscilloscope, radio transmitter and audio oscillator. Dick started competing in 1961, racing motorcycles spanning 15 years and became factory sponsored, taking him coast to coast, winning national competitions and netting him 120 trophies.
From 1979-present he has built an RV-6 low wing plane for his wife, Karol, and several more gyro machines, including a helicopter “the Humming Bird”, with counter rotating blades to eliminate the need for a tail rotor, otherwise known as a synchrocopter. This machine earned him the recognition as a proficient helicopter designer. This craft also won awards for “Outstanding New Design”, “Charles Lindbergh Grand Champion”, “Best Workmanship”, “Best Flying Helicopter.”
Dick is known worldwide as the Gyru on gyrocopters designs and safety features incorporated into his aircraft gyrocopter. In his small machine shop this humble soft spoken man turns out amazing innovations. He is presently working on a 2 place “Jump Start” gryocopter.
Dick and Karol are parents of Penny and Timothy, now both married, and also pilots.