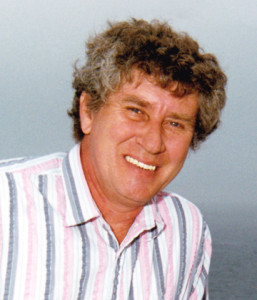 Robert A. Bracey of Almont, Michigan is perhaps best known in the snowmobile community for his twin track designs; Roamer, Raider, Manta, Trail Manta and Trail Roamer, however, his talents reached far beyond snowmobiling. During his lifetime Mr. Bracey worked with his associates to develop racecars, boats, a motorhome, MERA sports car (a conversion on a Pontiac field space frame), truck/van conversions, boats and a mini champ racecar. He even designed a home water distiller, wind generator, a corvette trailer as well as countless other cutting edge products. If you could dream it Bob could design and produce it.
During his career he worked for each of the big three automakers; Chrysler, Ford and GM.  In the 1960’s while employed at Kar Kraft, he worked on the design team that developed the Ford GT 40 racecar that went on to win the 24 Hours of Lemans. Operating as Techtron Services with long time friend John Drawe he worked on various phases of Mario Andretti’s Dean Van Lines Indy car. He was also responsible for the design and building of the two-speed automatic trans-axel for Andretti’s car. Over the course of his life he worked on race winning cars that ran in USAC, Indy and in the Can-Am Series.
Bob perhaps described his life best in a 1999 Interview with Steve Landon of “The Winning Edge Magazine”; “Unlike most people I know, my wife Carol has always let me run the gamut of things I wanted to do, I have loved her dearly for that over the last 40 years. I have always done for a living what others would do for enjoyment. I have had the fulfillment of working in the automotive field inventing new concepts in racecar design.
I’ve had a chance to rub shoulders with people like Mario Andretti, A.J. Foyt, Jim Clark, P.J. Jones, Al Unser, and Dan Gurney when others were just trying to get into the pits. This wasn’t work, I could have done it for 20 hours a day even if the pay wasn’t all that good, it was fun.” Bracey said!
Due to major changes in the auto industry in the late 1960’s/early ‘70’s Bob turned his attention to the growing snowmobile industry in 1969 forming Leisure Vehicles Inc. Driver safety was number one in his thoughts when it came to snowmobile design. He firmly believed in the idea of having drivers protected in a cockpit environment versus the limited protection offered on conventional snowmobiles. In 1970/’71 the rear engine twin track Roamer and Raider were born. After leaving LVI in 1974 he formed ARBE Products where he designed and he introduced the Manta, the first production rear engine racing snowmobile. A consumer version of the Manta was produced from 1983-1986.
Bob never gave up on his dream despite being clearly out gunned by the big four snowmobile manufacturers by staff and production capacity. His last snowmobile, the rear engine “Trail Roamer” debut in 1999, it featured a heated cockpit, radio and global positioning system. The sled was produced at his own company, Three R Industries in Capac, Michigan. The company did custom fiberglass work for homebuilders, truck, automotive, snowmobile and marine industry.
In addition to designing unique snowmobiles in the mid 1970’s Bob developed the ProVest, one of the first protective vests to protect the upper trunk and chest of professional and amateur snowmobile racers and the Lifeline Tether Switch to prevent machine runaway if the driver became separated from their machine. In 1975 he introduced the first push thru snowmobile track stud called the “Hot Tip”.
An avid boater Bob worked in the marine industry developing and producing various products. In1998 he designed and introduced a unique four passenger craft called the Tender Jet “The boat that thinks it’s a wave rider!”
The Tender Jet and the Trail Roamer would be his last major productions. In 2001 Bob and his wife closed their company and retired. Bob passed away in 2003.
One thing is clear Bob Bracey loved life and projected that enthusiasm to everyone he met. Like their boss the people that worked with him possessed an inner drive to take a dream from a few scratches on a napkin to reality. While he may not have known it at the time Bob touched and inspired the lives of many people, people who have gone on to do great things in the snowmobile, motorcycle, marine and automotive industry today.
In his closing hours on this world Mr. Bracey said “I’ve done everything I wanted to do, I just wanted to do it a little longer”. Their is no doubt he is in heaven working on some “OUT OF THIS WORLD” project that we’ll all have a chance to enjoy when we to head for the heavens someday.