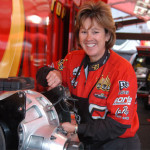 The daughter of a driver-turned-crew chief, Kim LaHaie (now Kim Richards) grew up immersed in the motor sports world. Her father, Dick LaHaie, began racing recreationally in the 1950s, and by the 1980s he was competing regularly in Top-Fuel dragsters. He was successful, earning a number of top finishes in the late 1980s, before eventually getting out from behind the wheel and becoming a crew chief. Kim did not sit on the sidelines and watch, but rather, she became an active participant. Raised in Lansing, Michigan, she started entering cross-country motorbike races by the age of fourteen.
After graduating from high school, she headed west to California, but soon returned to the Midwest and joined her brother, Jeff, who was working as a crew member on their father's Top-Fuel team. It was only the beginning of what would become a stellar career for her. She served as a crew chief on her father's car for several years, and continued to expand her knowledge and skills throughout the 1990s, working alongside her husband, Tim Richards, for racers Chuck Etchells and Connie Kalitta.
The couple spent the last eight years of their racing careers working with Kenny Bernstein before retiring to pursue other interests in 2008. 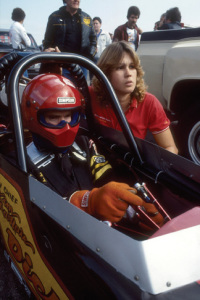 Early Influences: Much of Kim's interest in the racing industry began because of her father, Dick LaHaie, who raced throughout most of her early life, and even when he was not at the track, he was teaching Kim about mechanics. Kim was a quick learner and spent much of her youth doing hands-on activities. While out in California, her fascination with mechanics grew, frequently calling her father and getting his advice on how to build and repair various objects. Dick soon recognized how talented and knowledgeable she was and he eventually made her his crew chief. Working together as a team, they went on to win the 1987 NHRA Top-Fuel championship.
Education: Living in a racing family, it was not surprising that Kim gained some understanding of the sport and all of the work that went into it. Nevertheless, growing up at a time when women were expected to be in the stands, rather than in the garages, few could have imagined she would go on to have such an accomplished career in motor sports. She learned by doing, always trying to fix things around the house. When she had questions, she consulted her dad or learned by trial and error. One thing was certain; Kim had a raw, natural talent for mechanics and it served her well in her career. Career Path: Kim participated in cross-country motorbike races as a teenager. She later began working with her dad on his Top-Fuel team in 1982 and they earned top finishes every year from 1986 - 1990. Eager to get behind the wheel herself, 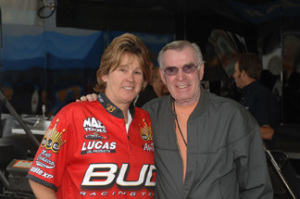 Richards drove a Top-Fuel dragster for Laurie and Larry Frazier during the 1992 season. She joined Chuck Etchells' racing team as a crew member in 1993 and soon became his clutch-management specialist, working with the team through 2000. Her husband, Tim Richards, also worked with the crew. In between working with Etchells' team, Kim joined Connie Kalitta'screw and worked on his Top-Fuel dragster in 1994. Kim and Tim worked for Kenny Bernstein as members of his Budweiser/Lucas Oil team from 2001 - 2008.
Major Responsibilities: In addition to serving as a crew chief in the late 1980s, Kim has helped with a number of jobs as a crew member for various teams. She is perhaps most well-known for her work with the clutch. An expert in the area, Kim spent much of her career taking the clutch apart, checking to make sure that it was in good, working condition, andreassembling it. She worked particularly hard in the mid-1990s to try and develop a pattern for checking new clutch discs for uniformity because teams, including Chuck Etchells', experienced problems with the composition of clutch discs the NHRA had decided on using in the mid-1990s. Clutches are critical to the performance in drag racing. While Kim did have a family connection, she was there because she was talented and interested in the field. Working alongside her father, she continued to gain mechanical experience, eventually becoming one of the best clutch-management specialists of the 1990s, according to driver Chuck Etchells. Etchells has praised Kim for her skill and consistency, traits she carried with her throughout her career. 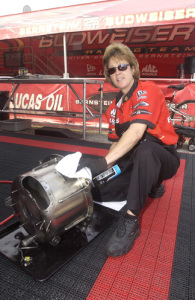 Life off the Track: Like her husband, Kim dedicated much of her life to the world of motor sports, working on cars at racetracks and in garages for the better part of three decades. In 2008, she and Tim finally retired, eager to pursue other dreams and spend some time relaxing. The two currently live in Florida. Apart from mechanics, Kim's other interests include symphonies and concerts.
Interesting Fact: Although she only raced for one season in 1992, Kim has often said that she preferred driving to anything else she did. She would have loved to continue, but because of the difficulties of finding a sponsor, she decided to return to working as crew member.
Awards and Achievements:
• She served as the crew chief on Dick LaHaie's car in 1987, helping him win the NHRA Top Fuel Championship that year.
• She was named Car Craft Top-Fuel Crew Chief of the Year in 1987.
• While working with her dad, Dick LaHaie, and acting as his crew chief, their team finished in the top-five every year from 1986 - 1990. They had three 3rd place finishes (1986, 1989, 1990), a 1st place finish (1987), and a 5th place finish (1988).