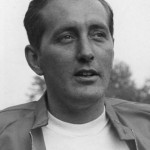 Marv Parenteau was one of the most victorious stock car drivers in Michigan winning more than ninety feature races from 1963 to 1972. He drove in the Figure 8, Sportsman and Late Model Super Stock divisions for car owners Howard Johnson, Stan Yee and Lyle Snover. Over the years his crew members included Harvey Craig, Mike Florindi, Bob Girten, Bob Halbach, Jim McCormick, Bob Millington, Steve Ranger, Joe Sabatino and John Yee.
Marv became interested in auto racing when he attended some races at the Mount Clemens Race Track (MCRT) in 1962. He bought a race car for $75 and drove it for the next 1? years until he and neighbor Howard Johnson built a new car for the 1964 season. He won five features in 1964, twelve in 1965 and eleven in 1966 earning runner-up finishes in the sportsman division standings in ’65 and ‘66. In 1967 he won twenty-one feature races and was crowned sportsman and double “O” division champion. 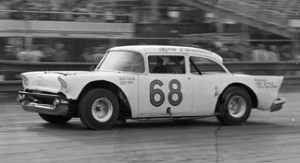 After dominating the sportsman and double “O” divisions by capturing fifty-two feature races from 1963 to 1967 (including three figure “8” features in 1965) Marv purchased a late model super stock for the 1968 season. He soon gained the attention of legendary car owner Stan Yee landing him in the seat of one of the most potent late model super stocks in the country – the #33 Yee Racing Chevelle.
1969 was an outstanding year for Marv at the MCRT as he won nine feature events including the “Firecracker 100” and the 100 lap mid-season championship race. In mid-August Marv won both legs of the annual “Mount Clemens 200” against a star-studded field consisting of nine current Michigan Motor Sports Hall of Fame drivers. He fell just short of the season title finishing second to then three-time champion Ray Nece. 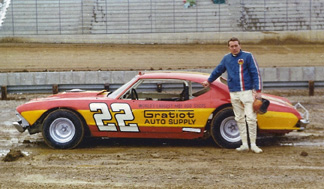 In 1970 Marv won eight feature events at the MCRT including the “Firecracker 50” and the 50 lap mid-season championship race en-route to his first super stock season championship. He added a feature win at the Tri-County (OH) Speedway, 50 lap wins at the Wayne County (OH) Speedway and at the Pennsboro (WV) Speedway, 100 lap wins at the Saint Clairsville (OH) Speedway and in the 2nd annual “Buckeye Classic” at the Wayne County Speedway. He also finished third in the “U.S. Dirt Track Championship” at the Tri-County Speedway.
In 1971 Marv was again one of the top super stock drivers at the MCRT scoring five feature wins including the 50 lap Memorial Weekend race and finishing in 3rd position in the final point standings. He chalked up another victory (and a second place finish) at the Pennsboro Speedway in the “Ritchie Memorial 100” twin 50 lap races. He recorded single feature wins at the Auto City (MI) Speedway, the Mansfield (OH) Raceway and the Millstream (OH) Speedway, two at the Wayne County Speedway and three at the Eldora (OH) Speedway.
The 1972 season at MCRT would be the last for Parenteau/Yee combination as they went their separate ways. Marv was out of racing until 1976 when he teamed with veteran car owner Lyle Snover to drive a brand new Howe Camaro. He ran mostly dirt races for the next two seasons until he retired in 1977. Marv passed away October 21, 2020.