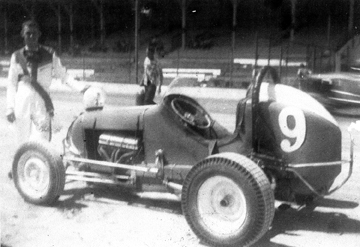 It was in 1988 that Art Braithwaite was inducted into the Michigan Motor Sports Hall of Fame. Art's career began back in 1949 when he began attending Jackson Motor Speedway. Then he began going to Butler Motor Speedway where he helped racers in the pits in whatever way he could. It wasn't long before Art began building his own race car, a micro midget in his dad's basement and raced it at Eaton Rapids, Nashville, and Clinton, Michigan.
Braithwaite bought his first sprint car at the age of 21, from Chuck Rice. Art drove his own race cars up until the early 70's. The two organizations that he raced with were the Mississippi Valley Racing Association and the IMCA while running 'outlaw' races all over the country. The states he raced in were MI, IN, IL, MO, KY, TN, GA, FL, PA, WI, AR, CA, NM, IA, ND, SD, SC, AL, LA, and also Canada.
It was at Anderson Speedway in Indiana, when the fuel line broke. The car erupted in flames. While attempting to get out of the still moving car, Art's foot got stuck in the cockpit causing him to be dragged 100 feet down the front straightway. He suffered 2nd and 3rd degree burns on his hands and legs and spent four months in the hospital. Art's driving career was on and off after this accident and he retired from driving in 1973 but continued to own and work on race cars. Art also raced snowmobiles for two years in 1970-'71 with the Michigan Snowmobile Association and the National Snowmobile Association.
Braithwaite has had a sprint car in the starting field of the Little 500 at Anderson Speedway 27 times along with racing in TRI_SAC, SOD, and the All Star Sprints.
Some of the drivers who have driven the Braithwaite sprinters have been Ralph Donalson, Jim Murphy, Tom York, Ron Semelka, Danny Johnson, Larry Blaisdell, Curt Kelley, Jim Slade, Jerry Sessions, Danny Krauss, and Art's daughter, Kelly Sue.
Art Braithwaite died on April 5, 2008 at the age of 69  (1938 - 2009)