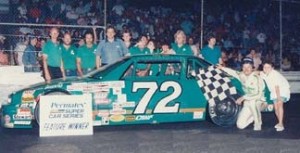 He finished 1st, 2nd and 1st in the “Kralinator Filter Triple 50” lap feature races at the Flamboro Speedway and was named the overall point champion for the event. He returned to Flamboro later that year and won both halves of the “Oktoberfest Twin 100s” once again being named the overall point champion. He also scored what would be the first of three consecutive wins in the annual “McKerlie - Millen 200” at the Delaware Speedway Park. In 1986 he won the “Dutch Treat 100” at the Sandusky Speedway; a 100 lap feature race at the Queen City Speedway; his second consecutive “McKerlie – Millen 200” at the Delaware Speedway Park and the Toledo Speedway Super Late Model track title. In 1987 he won a 100 lap “Race of Champions” at the Midvale Speedway; his second consecutive 100 lap feature at Queen City Speedway and his third consecutive “McKerlie-Millen 200” at the Delaware Speedway Park.
Leslie ran the full ARCA schedule in 1988 winning two pole awards, four races, the “Bill France Triple Crown Award” and the ARCA Permatex SuperCar Series National Championship all during his “rookie” year. In 1989 he won both ARCA races at the Talladega Superspeedway joining Davey Allison and Grant Adcox as the only drivers to sweep both events in the same season.

His success impressed racing legend A.J. Foyt and he was hired to drive the #14 Copenhagen Oldsmobile in two NASCAR Winston Cup Series races. In 1990 he picked up the ARCA “A/C Spark Plug 150 Pole Award” at the Pocono Raceway and a win in the ARCA “Michigan 200” at the Michigan International Speedway. In 1991 he would be driving full-time for Ron Parker and the Parker Racing Team in the NASCAR Busch Grand National Series (BGNS) beginning with the season opening “Goody’s 300” at the Daytona International Speedway in Daytona Beach, Florida.
Leslie drove the #72 Detroit Gasket entry from 1991 through ‘95 establishing a streak of 143 consecutive starts – the longest over that period of time. In 1993 he set a new track record in winning the “Champion Spark Plug 300 Pole Award” at the Charlotte Motor Speedway and scored his first NASCAR BGNS victory in the “Kroger 200” at the Indianapolis Raceway Park. He won the “USA vs. Australia NASCAR 200 Pole Award” at Calder Park Thunderdome in Melbourne, Australia in December, 1994 and the “GM Goodwrench/Delco Battery 200 Pole Award” at the Dover Downs Speedway in June, 1995. He and Parker parted ways with two races remaining in the 1995 season. 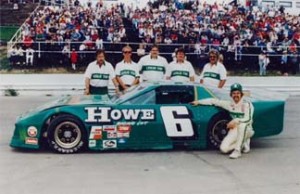 Leslie ran a limited BGNS schedule in 1996 making only eight starts in his self-owned Monte Carlo having a best finish of 10th at the Indianapolis Raceway Park. In 1997 and ’98 he signed with owner Hubert Hensley and the Hensley Racing Team to drive the #63 Lysol entry. He started 7th and finished 5th in the ’97 season opener – the “Gargoyles 300” at the Daytona International Speedway. His last race for the Hensley team was in the “MBNA Gold 200” at the Dover International Speedway in September, 1998.
Leslie returned to the ARCA Bondo/Mar-Hyde Series in 1999 and 2000 driving for three-time series champion Jack Bowsher. Together they won one pole award and two races – the “Winchester ARCA 200” at the Winchester Speedway and the “Kentuckiana Ford Dealers 200” at the Salem Speedway. Leslie finished his driving career in 2001 entering a handful of races in a car owned by fellow ARCA competitor Cavin Councilor. His last official victory came in 2007 as a car owner courtesy of his son Billy in the “Winchester ARCA 200” at Winchester Speedway.