We have 148 guests and no members online 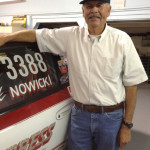 Mark L. Nowicki was born on September 26, 1950 in Detroit, MI, where his love of motorsports began. At age 16, unbeknownst to his parents, Mark raced his mother’s 1965 Plymouth Belvedere at Detroit Dragway and Lapeer Dragway. His first legit race car was a 1965 Plymouth Barracuda which he named the “Improvisor”.
In 1973, Mark and his wife Elaine moved to Gaylord, MI to open a heavy highway construction business, start a family, and continue racing.
Mark and Elaine still reside in Gaylord, operating their successful family business, M&M Excavating. 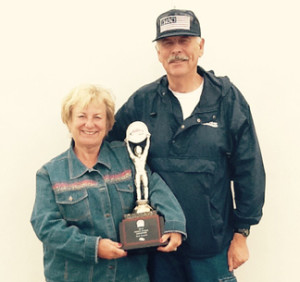 In more recent years, they have begun to winter in Florida, allowing them to race throughout the year.
In the early 1980’s, Mark bracket raced at Central Michigan Dragway with a 1973 Dodge Dart.  By the mid-1980’s, Mark modified the Dart to compete in the Super Street category,  racing against competitors like now-Pro Stock standout Larry Morgan. In NHRA Division Three Points, Mark scored a season high of 3rd with the Dart in the Super Street category. Mark is a member of the TRW 900 Club and a recipient of the Perfectly Strange Award. Beyond its impressive performance, the Dart was a pristine car that demanded a second look. The car was featured on the cover of Mopar Performance Parts Engine and Chassis Manual alongside Carroll Shelby, and on a Mopar Performance ad with Shirley Muldowney, with the Dart’s specs featured to build a competitive bracket racing car. 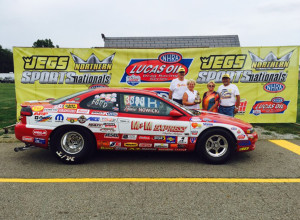 After retiring the ’73 Dart, Mark shifted his focus to building a 1990 Dodge Daytona into a front-to-rear wheel drive conversion to compete in the new NHRA Super/Stock GT classes. The car was the test vehicle for Chrysler’s front-to-rear wheel drive conversion kits, and was featured in many magazine articles and Chrysler promotions. With this car, Mark won back-to-back NHRA Division 4 point events at State Capital Dragway in Baton Rouge, LA in 1997 and 1998, defeating World Champions Greg Stanfield and Edmund Richardson along the way.