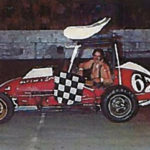 Jerry Lee Carman was born on August 27, 1947 in Coldwater, Michigan. He started his racing career in 1964 at Butler Motor Speedway in a roll-over competition. He broke the windows out of his own car, and entered it into thecompetition.
In 1968, Jerry bought his first race car from Harold Reynolds’ junk yard and started to race at Butler Motor Speedway in Quincy, Michigan. The racing bug bit him. He raced at Butler, Manchester, and Steuben County Speedways between 1968 and 1970.
In 1971, Jerry got a ride with the Stickney-Whitey #99 roadster car for Tri-Sac Racing Series. In 1971, he finished 16th in overall points. In 1972, he improved to 7th in overall points. In 1973, Jerry was voted most improved driver and finished 7th in overall points. 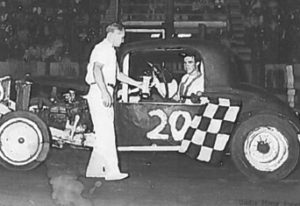 Jerry was self-employed doing auto body work from 1972 to 1978. He sold Goodyear racing tires at race tracks from 1975 to 1978 and then established Carman Enterprises in 1978. Jerry created, designed, and manufactured Carman Safety Locks. These locks prevent tires from going flat or blowing out during races. The design allowed you to run the air pressure on the tires very low without chance of the tires coming off the rims. They allowed competitive racing while maintaining safety and preventing accidents. Carman Safety Locks were sold worldwide for race cars of every type. Jerry owned the business for 15 years before selling it. Carman Safety Locks are still sold today.
In 1974, Jerry raced the Bible-Johns #77 super modified car where he established track records at Berlin, Kalamazoo, and Owosso Speedways in Michigan and Avilla Speedway and Baer Field Speedways in Indiana. Halfway through the year, Jerry went back to the Stickney-Whitey #99 super modified. Then returned to the #77 super modified after the car was sold to Harry Stickney. In 1974, Jerry finished 3rd in overall points. Highlights of the year included a 3rd place finish at the Winchester Speedway Snowball 50. 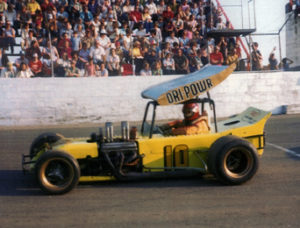 In 1975, Jerry was named President of Tri-Sac racing series. He drove in the Little 500 at Anderson Speedway in relief of Bill Roynon from laps 188 to 304 and finished in 2nd place. In Tri-Sac he drove the Stickney #77. Jerry also drove the #55 sprint car owned by Ed and Rowend Wurster. Jerry proved he was the best on dirt, winning the feature race. Jerry also drove the #64 car for the Tri-Sac series that year.
In 1976, Jerry drove in relief of Galen Short for the last 148 laps and finished 4th at the Little 500. He drove for Bernie Bennett in his rear engine car, the Shattuck #10 car, Harry Stickney’s #99 car and many more. With different cars, he won five features that year and set three track records in the Shattuck #10 super modified Car at Kalamazoo, Berlin and Avilla.
In 1977, Jerry drove in the Little 500, Anderson Indiana for the first full ride in the Robert Shattuck #10 super modified car. He started 22nd and finished 14th. In the Tri-Sac series he drove the Coats #30, a 20-year-old Sprinter, to a 4th place finish.
In 1978 he raced with the World of Outlaws in the Coats #3 car in Florida. With more than 100 cars racing, he was 3rd fastest overall. Upon return, Jerry drove in the Little 500 in Anderson with the Max Dowker team. He finished 7th. He started driving for Max and Butch Dowker driving the famous Dowker-Soltow Titanium roadster #1 car with great success. He won 15 out of 18 features and set many new track records including tracks in Kalamazoo, and Delaware, Ontario. He also set a new world record for ½ mile tracks at Winchester Speedway (15.574 sec – 116.155 mph). This was his best year ever. He won his first Championship with the Tri-Sac Series. He set a new track record at Delaware Speedway in Canada (7/1/1978) at 18:21 seconds and won the feature race.
In 1979 he drove the #36 Sonny McHenry-Collins car out of Jackson, Michigan where they raced the car in the USAC Series. Jerry went on to receive USAC Rookie of the Year honors and placed in the top 20 in points.

In 1980, Jerry started out with the 20-year-old #3 Coats-Nance Sprint car to the Knoxville Nationals in Iowa finishing 20th in the A Main on the 2nd night. He also raced in the SOD Series this year and ended up 2nd place in overall points with six feature wins in the #3 Coats-Nance Car.
In 1981, Jerry raced the SOD Series in the #3 Coats car. He had eight feature wins in SOD, four second place finishes, and established three new track records. He also had 10 fast dash wins and six fastest qualifying times.
In 1982 and 1983, Jerry returned to Butler Motor Speedway in the #36 McHenry-Collins dirt car. He won some races and finished in the top five in points. Between 2008 and 2013, Jerry returned to the track Auto-Value Super Sprints Director.
Above all things, Jerry was a humble, fair, and ethical man who loved racing. Regarding the type of motor sports, we are nominating him for – it is hard to say. As you can see from his history, he would race anything with four wheels. Whether selling Carman Safety Locks trackside, mentoring younger drivers, advising racers on race car set up, or helping tracks to manage races, he dedicated his life to advancing the sport of racing.
Jerry Carman died March 23, 2014.