We have 156 guests and no members online

Bud started out Snowmobile Racing on the grass in 1968/69 Driving Rupp Snowmobiles for Dell Stone of Stones Sport & Marine. Two stroke knowledge from Go Kart Racing gave Bud an advantage in getting the most power from the engines.
Through the years of 1969 through 1973/74 Bud raced Rupp’s with full factory backing. Those sleds included Yankee, Nitros and M8 Gaurs. He built one of the first front engine sleds using the 5R Engine, with Bob Nemicheck, Jim Thornton, Gene Brown, Michigan Cal Ackley and Lyle Forsgree. From 400-800 CC Engines with two, three and four cylinders. Bud raced the Polaris TX399 in several Cross Country events including Grand Island.

In 1968 he had the opportunity to race as a factory backed driver with the Ruttman’s of racing and mini bike fame, Troy, Joe and Jim. They were scheduled to go to Soldier’s Field in Chicago for a big event, but unfortunately the weekend before Bud cracked a brand new Ski Doo 399 that he was testing for someone. The bolt came out of the handle bar and as he going over a hill on a cross country test course, it came off in his hands and pulled the throttle full open. Needless to say he crashed into a ravine and the steering shaft shattered his knee cap with part of the knee cap lodging into his joint. When Lyle Forsgren left Rupp, he went to Mercury and developed the Sno Twister. He contacted Bud to see if he would be interested in running it for Mercury. He immediately agreed, knowing how good Lyle was at Engineering things! He sent Bud a 400 and a box of spare parts but not too many were needed because it was one of the best sleds he had ever driven. There were very few times that Bud was beaten with this sled, he was making more money racing this sled than he was at his job!
Bud moved on to racing Stock cars on the dirt track in Mt Clemens, Auto City two nights a week and then raced at Clarkes, winning the Michigan Auto Racing Rookie of the Year. He won five Short Track Races the first year including traveling to Sedalia Missouri and winning the Missouri State Fair IMSA 100 Lap Race breaking the Track record of 1 ¾ seconds. 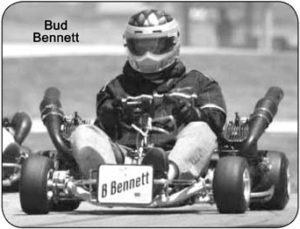