We have 989 guests and no members online 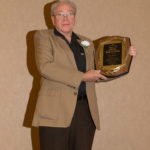 Roy Johnson, born and raised in Lansing Michigan, has long had a love for cars and drag racing. When asked how his passion for motorsports began, he chuckles and said: “Lust for speed and girls.” He began racing in 1957 in the Stocker Class at Central Michigan and Onondaga Dragway. His racing career, albeit a short one, was one of the most exciting five years of his life.
In 1959, at the age of 19, Roy started Johnson’s Speed Shop out of the garage of his Lansing, MI home. In 1960, only a year after he started, Johnson’s Sped Shop moved to a 1,200 square-foot building/gas station along Cedar St. in south Lansing.

In 1962, Roy quit his two jobs to concentrate his full attention on the business. His hard work, dedication, and passion for motorsports paid off and eight years later on January 2, 1970 Johnson’s Speed Shop held its grand opening at its current location. The new building, on North Grand River, provided a more prominent location with additional retail space.
During the years of 1972 to 1975, Johnson’s Speed Shop began delivering performance parts throughout mid-Michigan. In an attempt to expand the business’ capacity, Roy hired salesmen who began traveling the mid-west and Canada offering performance parts at wholesale. To capitalize on the momentum, Roy began sponsoring local drivers in drag and oval track racing. 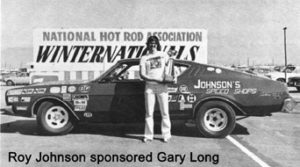 The oil embargo of 1979 forced the business to downsize leaving only Roy, and his wife, Agnes to run the store. As many businesses in the industry folded under the weight of the oil crisis, Johnson’s Speed Shop weathered the storm and in the early 80’s Roy began purchasing inventory from manufacturers going out of business. As a result, more space was needed. In 1985 Johnson’s Speed Shop built a 9,000 square foot addition. Today, Johnson’s Speed Shop is one of the largest suppliers of pistons and other engine parts in the United States.
After 57 years in the racing industry, Roy’s passion for motorsports and his dedication to Johnson’s Speed Shop is as evident as it was when he began. The success of the business has been, in part, due to the endless support of Roy’s four children, and late wife, Agnes. At some time in their lives, every one of Roy’s children has worked alongside him at the shop. Roy’s never-ending commitment to his dream made quite an impression on his children. 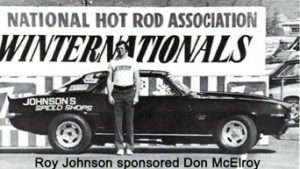 Most days, you can find Roy at his store providing high quality performance parts to motorsport enthusiasts, sharing stories with customers who have trusted the store with their part needs for decades, and working alongside his son, Steve. When asked about retiring, he replies, “I will probably work until I am 85 or 90, or for as long as I am able.” 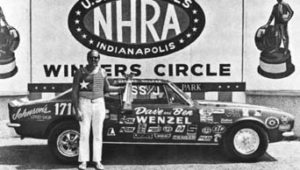