We have 515 guests and no members online

Allan E. Brown has dedicated his life to the preservation and promotion of auto racing. He grew up just minutes away from the rumble of race engines at Berlin Raceway and remembers many nights cheering from those fairground grandstands. 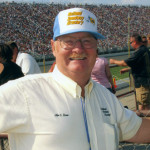 Throughout his childhood and into early adulthood Allan remained a faithful fan, traveling with his dad to various races including the Indy 500, the Daytona 500, and a bunch of short-tracks in between.
In 1967 Brown was drafted into the U.S. Army and in 1968 he got positioned as the night dispatcher. As Brown recalled, “That left me with a LOT of time to think. I was getting the trade papers like the National Speed Sport News and began compiling a directory of sorts with the tracks.”
After getting out of the service Allan was back on the racing scene enjoying events throughout the nation, it was then at a 100-lapper at Avilla (IN) Allan met Larry Yard and his life-path changed. Yard had just published the 1972 Midwest Auto Racing Guide. The two became friends and when Yard relocated to Grand Rapids at the end of that year he enlisted Brown’s help in compiling the next edition. Between Brown working as a carpenter and dealing with garnering information, the work was tedious, but the duo managed to publish a book over double the size of the original. Brown worked alongside Yard as a side-kick until other obligations prevented Yard from continuing to print the guide after the 1977 edition was published. Knowing taking over a publication of that magnitude with no knowledge of publishing would be difficult to say the least, Brown struck up the idea of publishing a smaller book titled the “National Late Model Annual”. The publication was a success and Brown enlisted his friends Ross & Nanette Ferguson to partner with him for the publishing of the 1980 Directory. 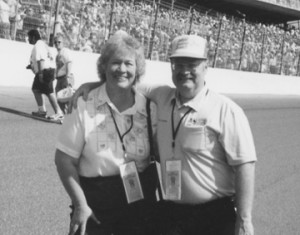 Popularity for the publication grew and they printed again in 1982 & 1984. By 1984 technology had finally begun to assist smaller publishers and with a new computer in their possession the three began yearly printing of the Directory as well as the National Sprint Car Annual. In 1989 the Fergusons sold their share of the business to Allan in order to build a speedway. The National Speedway Directory has been fully family owned and operated. Allan’s wife of 25-years Nancy came on full-time in 1990 and although Allan says with a chuckle, “I was the President and she’s the boss” the two have made an incredible team as evidenced in 2002 when they were honored with the Stew Reamer Award for lifetime service to the weekly racing industry. In late 2009 the Brown’s made the very difficult decision to semi-retire and sell the National Speedway Directory to Tim & Margo Frost, but Allan and Nancy are not too far removed from the operation as they have continued to act as the publications editors.
In addition to traveling to upwards of 100 races a season and promoting the Directory, Allan is also an integral part of the sport through preserving history. He has printed an amazing book titled “History of America’s Speedways”. He is also a Board of Directors member and Secretary/Treasurer of the Michigan Motor Sports Hall of Fame, a voting member of the National Motor Sports Hall of Fame, an Auxiliary Board Member of the National Sprint Car Hall of Fame, a Board member on the National Dirt Late Model Hall of Fame, and the Secretary/Treasurer of the Michigan Speedway Promoters Association.
Over the past three decades Brown has been a great ambassador for the sport and in 2009 he was honored for his contributions by becoming a National Sprint Car Hall of Fame inductee, Allan relayed with emotion, “It came as such a surprise to me. I’m just a race fan who happened to turn my love of racing into a profession”